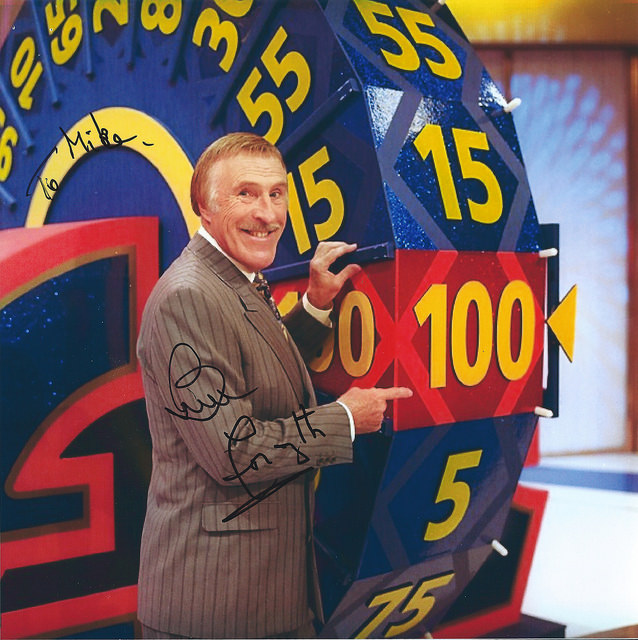 I’ll score myself with two points for being correct, one point for mostly right and zero for wrong. That’ll give me a maximum possible score of fourteen. Here goes...

2017-1: 1Tbps DDoS attacks will become the baseline for ‘massive attacks’

This turned out to be true but mostly because massive attacks went away as Layer 3 and Layer 4 DDoS mitigation services got good at filtering out high bandwidth and high packet rates. Over the year we saw many DDoS attacks in the 100s of Gbps (up to 0.5Tbps) and then in September announced Unmetered Mitigation. Almost immediately we saw attackers stop bothering to attack Cloudflare-protected sites with large DDoS.

So, I’ll be generous and give myself one point.

2017-2: The Internet will get faster yet again as protocols like QUIC become more prevalent

Well, yes and no. QUIC has become more prevalent as Google has widely deployed it in the Chrome browser and it accounts for about 7% of Internet traffic. At the same time the protocol is working its way through the IETF standardization process and has yet to be deployed widely outside Google.

So, I’ll award myself one point for this as QUIC did progress but didn’t get as far as I thought.

2017-3: IPv6 will become the defacto for mobile networks and IPv4-only fixed networks will be looked upon as old fashioned

IPv6 continued to grow throughout 2017 and seems to be on a pretty steady trajectory upwards. Although it’s not yet deployed on ¼ of the top 25,000 web sites. Note that the large jump in IPv6 support that occurred in the middle of 2016 when Cloudflare enabled it by default for all our customers. 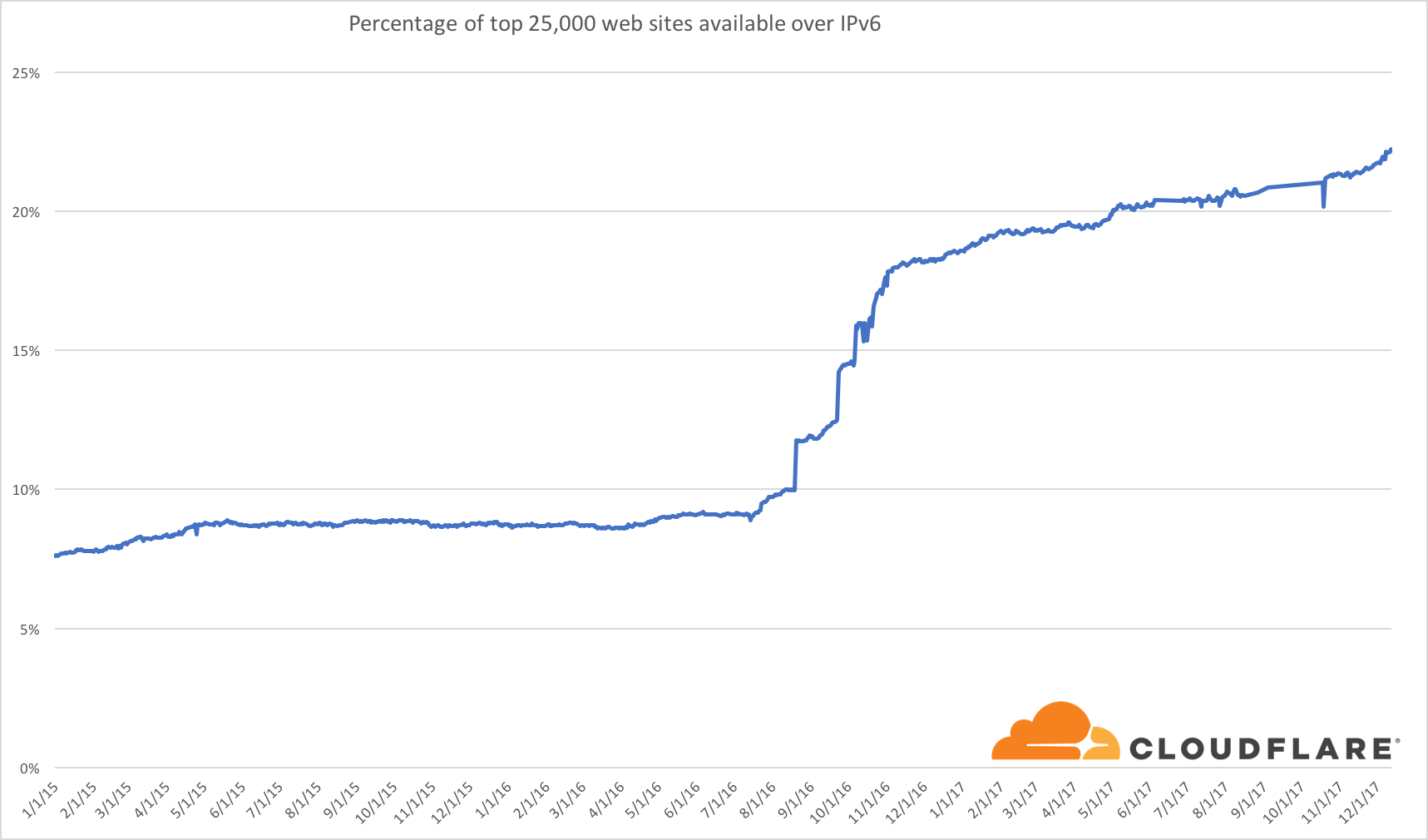 The Internet Society reported that mobile networks that switch to IPv6 see 70-95% of their traffic use IPv6. Google reports that traffic from Verizon is now 90% IPv6 and T-Mobile is turning off IPv4 completely.

That happened on 23 February 2017 with the announcement of an efficient way to generate colliding PDF documents. It’s so efficient that here are two PDFs containing the old and new Cloudflare logos. I generated these two PDFs using a web site that takes two JPEGs, embeds them in two PDFs and makes them collide. It does this instantly.

They have the same SHA-1 hash:

So, two points for getting that right (and thanks, Nick Sullivan, for suggesting it and making me look smart).

The one constant of 2017 in terms of DDoS was the prevalence of Layer 7 attacks. Even as attackers decided that large scale Layer 3 and 4 DDoS attacks were being mitigated easily and hence stopped performing them so frequently, Layer 7 attacks continued apace with attacks in the 100s of krps common place.

Awarding myself one point because Layer 6 attacks didn’t materialize as much as predicted.

2017-6: Mobile traffic will account for 60% of all Internet traffic by the end of the year

Ericsson reported mid-year that mobile data traffic was continuing to grow strongly and grew 70% between Q116 and Q117. Stats show that while mobile traffic continued to increase its share of Internet traffic and passed 50% in 2017 it didn’t reach 60%.

Zero points for me.

2017-7: The security of DNS will be taken seriously

This has definitely happened. The 2016 Dyn DNS attack was a wake up call that often overlooked infrastructure was at risk of DDoS attack. In April 2017 Wired reported that hackers took over 36 Brazilian banking web sites by hijacking DNS registration, and in June Mozilla and ICANN proposed encrypting DNS by sending it over HTTPS and the IETF has a working group on what’s now being called doh. 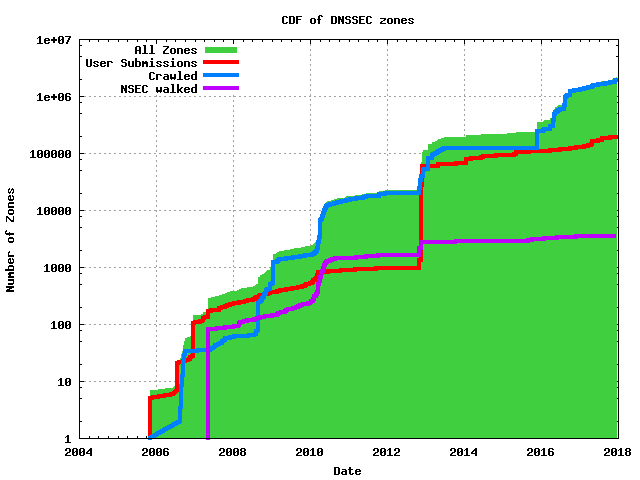 So, two points for me.

The roll out of TLS 1.3 has been stalled because of difficulty in getting it working correctly in the heterogenous Internet environment. Although Cloudflare has had TLS 1.3 in production and available for all customers for over a year only 0.2% of our traffic is currently using that version.

Given the state of standardization of TLS 1.3 today we believe that major browser vendors will enable TLS 1.3 during 2018 and by the end of the year more than 50% of HTTPS connections will be using the latest, most secure version of TLS.

In Mary Meeker’s 2017 Internet Trends report she gives on statistics (slide 183) on the top three concerns of users of cloud computing. These show a striking change from being primarily about security and cost to worries about vendor lock-in and compliance. Cloudflare believes that vendor lock-in will become the top concern of users of cloud computing in 2018 and that multi-cloud strategies will become common.

BillForward is already taking a multi-cloud approach with Cloudflare moving traffic dynamically between cloud computing providers. Alongside vendor lock-in, users will name data portability between clouds as a top concern.

Self-driving cars won’t become available in 2018, but AI/ML will remain red hot as every technology company tries to hire appropriate engineering staff and finds they can’t. At the same time deep learning techniques will be widely applied across companies and industries as it becomes clear that these techniques are not limited to game playing, classification, or translation tasks and can be widely applied.

Expect unexpected applications of techniques, that are already in use in Silicon Valley, when they are applied to the rest of the world. Don’t be surprised if there’s talk of AI/ML managed traffic management for highways, for example. Anywhere there's a heuristic we'll see AI/ML applied.

But it’ll take another couple of years for AI/ML to really have profound effects. By 2020 the talent pool will have greatly increased and manufacturers such as Qualcomm, nVidia and Intel will have followed Google’s lead and produced specialized chipsets designed for deep learning and other ML techniques.

A corollary to users’ concerns about cloud vendor lock-in and the need for multi-cloud capability is that an orchestration framework will dominate. We believe that Kubernetes will be that dominant platform and that large cloud vendors will work to ensure compatibility across implementations at the demand of customers.

We are currently in the infancy of k8s deployment with the major cloud computing vendors deploying incompatible versions. We believe that customer demand for portability will cause cloud computer vendors to ensure compatibility.

2018-5: Quantum resistant crypto will be widely deployed in machine-to-machine links across the internet

2018-6: Mobile traffic will account for 60% of all Internet traffic by the end of the year

Based on the continued trend upwards in mobile traffic I’m predicting that 2018 (instead of 2017) will be the year mobile traffic shoots past 60% of overall Internet traffic. Fingers crossed.

2018-7: Stable BTC/USD exchanges will emerge as others die off from security-based Darwinism

The meteoric rise in the Bitcoin/USD exchange rate has been accompanied by a drumbeat of stories about stolen Bitcoins and failing exchanges. We believe that in 2018 the entire Bitcoin ecosystem will stabilize.

This will partly be through security-based Darwinism as trust in exchanges and wallets that have security problems plummets and those that survive have developed the scale and security to cope with the explosion in Bitcoin transactions and attacks on their services.