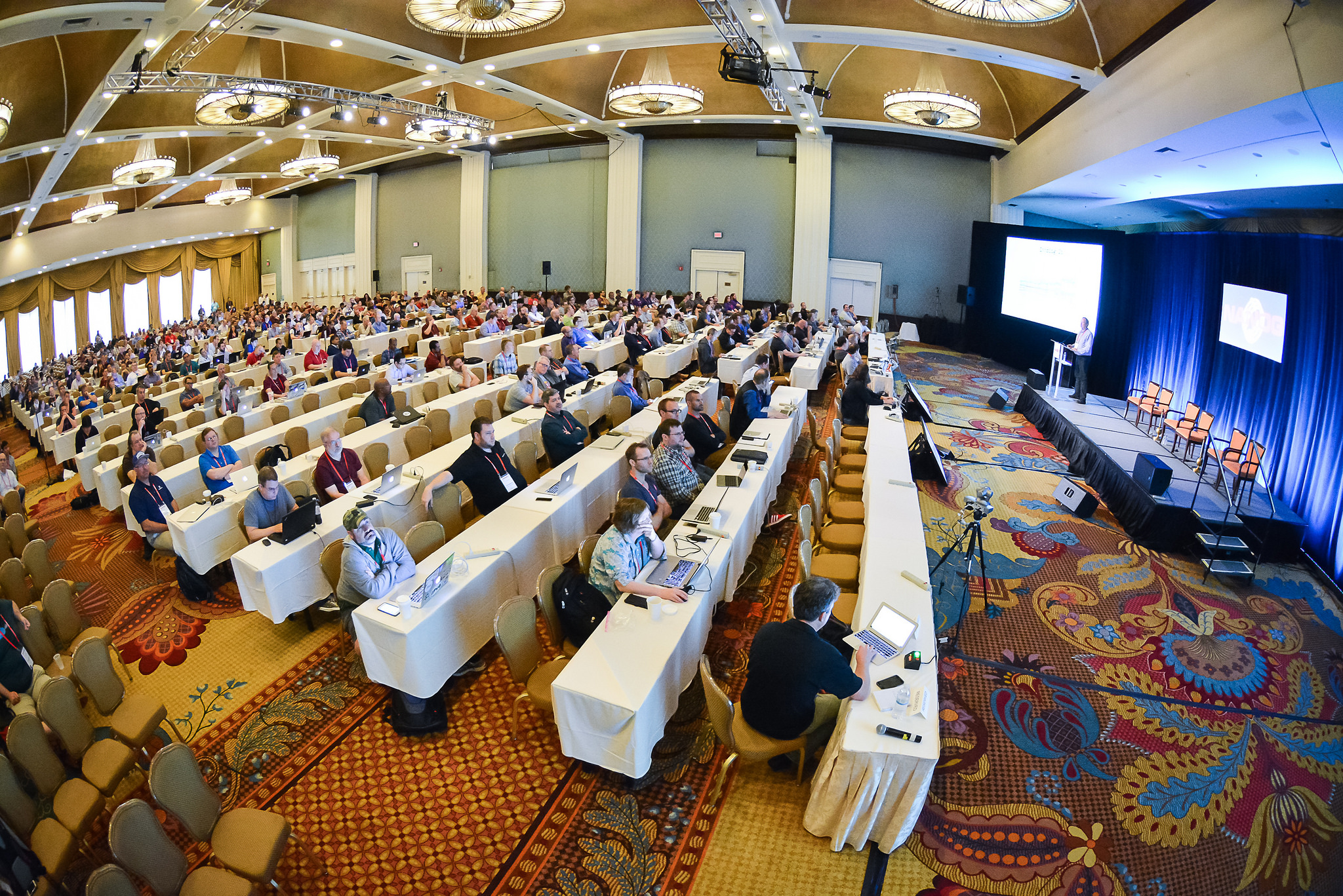 The North American Network Operators Group (NANOG) is the loci of modern Internet innovation and the day-to-day cumulative network-operational knowledge of thousands and thousands of network engineers. NANOG itself is a non-profit membership organization; but you don’t need to be a member in order to attend the conference or join the mailing list. That said, if you can become a member, then you’re helping a good cause.

The next NANOG conference starts in a few days (February 6-8 2017) in Washington, DC. Nearly 900 network professionals are converging on the city to discuss a variety of network-related issues, both big and small; but all related to running and improving the global Internet. For this upcoming meeting, Cloudflare has three network professionals in attendance. Two from the San Francisco office and one from the London office.

With the conference starting next week, it seemed a great opportunity to introduce readers of the blog as to why a NANOG conference is so worth attending.

While it seems obvious how to do some network tasks (you unpack the spiffy new wireless router from its box, you set up its security and plug it in); alas the global Internet is somewhat more complex. Even seasoned professionals could do with a recap on how traceroute actually works, or how DNSSEC operates, or this years subtle BGP complexities, or be enlightened about Optical Networking. All this can assist you with deployments within your networks or datacenter.

If there’s one thing that keeps the Internet (a network-of-networks) operating, it’s peering. Peering is the act of bringing together two or more networks to allow traffic (bits, bytes, packets, email messages, web pages, audio and video streams) to flow efficiently and cleanly between source and destination. The Internet is nothing more than a collection of individual networks. NANOG provides one of many forums for diverse network operators to meet face-to-face and negotiate and enable those interconnections.

While NANOG isn’t the only event that draws networks together to discuss interconnection, it’s one of the early forums to support these peering discussions.

In this day-and-age we are brutally aware that security is the number-one issue when using the Internet. This is something to think about when you choose your email password, lock screen password on your laptop, tablet or smartphone. Hint: you should always have a lock screen!

At NANOG the security discussion is focused on a much deeper part of the global Internet, in the very hardware and software practices, that operate and support the underlying networks we all use on a daily basis. An Internet backbone (rarely seen) is a network that moves traffic from one side of the globe to the other (or from one side of a city to the other). At NANOG we discuss how that underlying infrastructure can operate efficiently, securely, and be continually strengthened. The growth of the Internet over the last handful of decades has pushed the envelope when it comes to hardware deployments and network-complexity. Sometimes it only takes one compromised box to ruin your day. Discussions at conferences like NANOG are vital to the sharing of knowledge and collective improvement of everyone's networks.

Above the hardware layer (from a network stack point of view) is the Domain Name System (DNS). DNS has always been a major subject of discussion within the NANOG community. It’s very much up to the operational community to make sure that when you type a website name into web browser or type in someone’s email address into your email program that there’s a highly efficient process to convert from names to numbers (numbers, or IP address, are the address book and routing method of the Internet). DNS has had its fair share of focus in the security arena and it comes down to network operators (and their system administrator colleagues) to protect DNS infrastructure.

Nearly everyone knows that bad news sells. It’s a fact. To be honest, the same is the case in the network operator community. However, within NANOG, those stories of disasters are nearly always told from a learning and improvement point of view. There’s simply no need to repeat a failure, no-one enjoys it a second time around. Notable stories have included subjects like route-leaks, BGP protocol hiccups, peering points, and plenty more.

We simply can’t rule out failures within portions of the network; hence NANOG has spent plenty of time discussing redundancy. The internet operates using routing protocols that explicitly allow for redundancy in the paths that traffic travels. Should a failure occur (a hardware failure, or a fiber cut), the theory is that the traffic will be routed around that failure. This is a recurring topic for NANOG meetings. Subsea cables (and their occasional cuts) always make for good talks.

While we learned twenty or more years ago how to type into Internet routers on the command line, those days are quickly becoming history. We simply can’t scale if network operational engineers have to type the same commands into hundreds (or thousands?) of boxes around the globe. We need automation. This is where NANOG has been a leader in this space. Cloudflare has been active in this arena and Mircea Ulinic presented our experience for Network Automation with Salt and NAPALM at the previous NANOG meeting. Mircea (and Jérôme Fleury) will be giving a follow-up in-depth tutorial on the subject at next week’s meeting.

The first NANOG conference was held June 1994 in Ann Arbor, Michigan and the conference has grown significantly since then. While it’s fun to follow the history, it’s maybe more important to realize that NANOG has covered a multitude of subjects since that start. Go scan the archives at nanog.org and/or watch some of the online videos.

The socials (downtime between technical talks)

Let’s not forget the advantages of spending time with other operators within a relaxed setting. After all, sometimes the big conversations happen when spending time over a beer discussing common issues. NANOG has long understood this and it’s clear that the Tuesday evening Beer ’n Gear social is set up specifically to let network geeks both grab a drink (soft drinks included) and poke around with the latest and greatest network hardware on show. The social is as much about blinking lights on shiny network boxes as it is about tracking down that network buddy.

Oh; there’s a fair number of vendor giveaways (so far there’s 15 hardware and software vendors signed up for next week’s event). After all, who doesn’t need a new t-shirt?

But there’s more to the downtime and casual hallway conversations. For myself (the author of this blog), I know that sometimes the most important work is done within the hallways during breaks in the meeting vs. standing in front of the microphone presenting at the podium. The industry has long recognized this and the NANOG organizers were one of the early pioneers in providing full-time coffee and snacks that cover the full conference agenda times. Why? Because sometimes you have to step out of the regular presentations to meet and discuss with someone from another network. NANOG knows its audience!

Besides NANOG, there’s IETF, ICANN, ARIN, and many more

NANOG isn’t the only forum to discuss network operational issues, however it’s arguably the largest. It started off as a “North American” entity; however, in the same way that the Internet doesn’t have country barriers, NANOG meetings (which take place in the US, Canada and at least once in the Caribbean) have fostered an online community that has grown into a global resource. The mailing list (well worth reviewing) is a bastion of networking discussions.

In a different realm, the Internet Engineering Task Force (IETF) focuses on protocol standards. Its existence is why diverse entities can communicate. Operators participate in IETF meetings; however, it’s a meeting focused outside of the core operational mindset.

Central to the Internet’s existence is ICANN. Meeting three times a year at locations around the globe, it focused on the governance arena and in domain names and related items. Within the meetings there’s an excellent Tech Day.

In the numbers arena ARIN is an example of a regional routing registry (an RIR) that runs members meeting. An RIR deals with allocating resources like IP addresses and AS numbers. ARIN focuses on the North American area and sometimes holds its meetings alongside NANOG meetings.

ARIN’s counterparts in other parts of the world also hold meetings. Sometimes they simply focus on resource policy and sometimes they also focus on network operational issues. For example RIPE (in Europe, Central Asia and the Middle East) runs a five-day meeting that covers operational and policy issues. APNIC (Asia Pacific), AFRINIC (Africa), LACNIC (Latin America & Caribbean) all do similar variations. There isn’t one absolute method and that's a good thing. It’s worth pointing out that APNIC holds it’s members meetings once a year in conjunction with APRICOT which is the primary operations meeting in the Asia Pacific region.

While NANOG is somewhat focused on North America, there are also the regional NOGs. These regional NOGs are vital to help the education of network operators globally. Japan has JANOG, Southern Africa has SAFNOG, MENOG in the Middle East, AUSNOG & NZNOG in Australia & New Zealand, DENOG in Germany, PHNOG in the Philippines, and just to be different, the UK has UKNOF (“Forum” vs. “Group”). It would be hard to list them all; but each is a worthwhile forum for operational discussions.

In the commercial realms there’s plenty of other meetings that are attended by networks like Cloudflare. PTC and International Telecoms Week (ITW) are global telecom meetings specifically designed to host one-to-one (bilateral) meetings. They are very commercial in nature and less operational in focus.

As you would guess, you will find our network team at RIR meetings, sometimes at IETF meetings, sometimes at ICANN meetings, often at various regional NOG meetings (like SANOG in South East Asia, NoNOG in Norway, RONOG in Romania, AUSNOG/NZNOG in Australia/New Zealand and many other NOGs). We get around; however, we also run a global network and we need to interact with many many networks around the globe. These meetings provide an ideal opportunity for one-to-one discussions.

If you've heard something you like from Cloudflare at one of these operational-focused conferences, then check out our jobs listings (in various North American cities, London, Singapore, and beyond!)