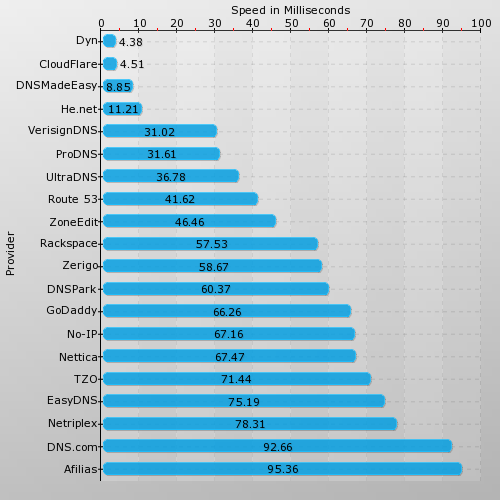 CloudFlare runs one of the largest networks of DNS servers in the world. Over the last few months, we've invested in making our DNS as fast and responsive as possible. We were happy to see these efforts pay off in third-party DNS test results.

The good folks at SolveDNS conduct a monthly survey of the fastest DNS providers in the world. CloudFlare has regularly been in the top-5 fastest DNS providers. This month we're up to number two, with SolveDNS's tests showing an average 4.51ms response time. That's just a hair behind number one (at 4.38ms) and almost twice as fast as number three (at 8.85ms). And, unlike most the other DNS providers in the top-10, CloudFlare's fast Anycast DNS service is provided even for our free plans.

Lest you think we're resting on our laurels, we've got a major DNS release (which we've dubbed RRDNS) scheduled for the next few months that we think will allow us to squeeze a bit more speed out of our DNS lookups. We're shooting for number one!

Go has a debugger—and it's awesome!

Something that often, uh... bugs Go developers is the lack of a proper debugger. Builds are ridiculously fast and easy, but sometimes it would be nice to just set a breakpoint and step through that endless if chain or print a bunch of values without recompiling ten times....