How Syria Turned Off the Internet (Again)

Today at 18:48 UTC, Syria dropped off the Internet. Based on the data we collect from our network, as well as reports from other organizations monitoring network routes, it appears that someone systematically withdrew the BGP (Border Gateway Protocol) routes from the country's border routers. This is the same technique that was used to withdraw Syrian Internet access last November.

The video below, which we generated using BGPlay, shows the routes in to the Syrian Internet being withdrawn:

The graph below shows the requests to CloudFlare's network from the Syrian Internet space over the last 6 hours (times are UTC): 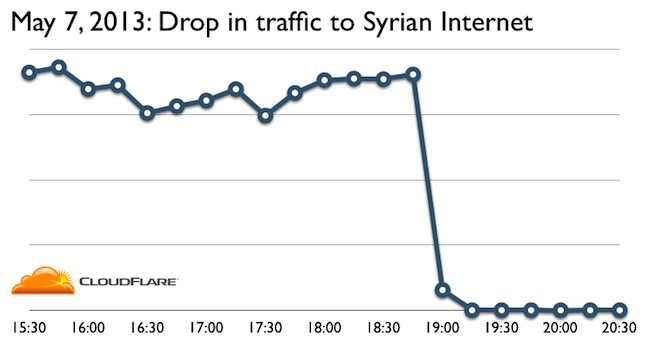 We will continue to monitor Syrian traffic and post updates here if we see connectivity return.

Is BGP safe yet? If the question needs asking, then it isn't. But how far the Internet is from this goal is what we set out to answer....