Since March 30, 2017, Cloudflare has been providing DNS Anycast service as additional F-Root instances under contract with ISC (the F-Root operator).

F-Root is a single IPv4 address plus a single IPv6 address which both ISC and Cloudflare announce to the global Internet as a shared Anycast. This document reviews how F-Root has performed since that date in March 2017.

At Cloudflare, we were excited to work with ISC to bring greater security, speed and new software diversity to the root server system. First, the root servers, because of their crucial role, are often the subject of large scale volumetric DDoS attacks, which Cloudflare specializes in mitigating (Cloudflare is currently mitigating two concurrently ongoing DDoS attacks as we write this). Second, with a distributed network of data centers in well over 100 global cities, Cloudflare DNS is close to the end client which reduces round trip times. And lastly, the F-root nodes hosted by Cloudflare also run Cloudflare’s in-house DNS software, written in Go, which brings new code diversity to the root server system.

Throughout the deployment, ISC and Cloudflare paid close attention to telemetry measurements to ensure positive impact on the global DNS and root server system. Here is what both organizations observed when transit was enabled to Cloudflare DNS servers for F-Root.

Using RIPE atlas probe measurements, we can see an immediate performance benefit to the F-Root server, from 8.24 median RTT to 4.24 median RTT.

F-Root actually became one of the fastest performing root servers: 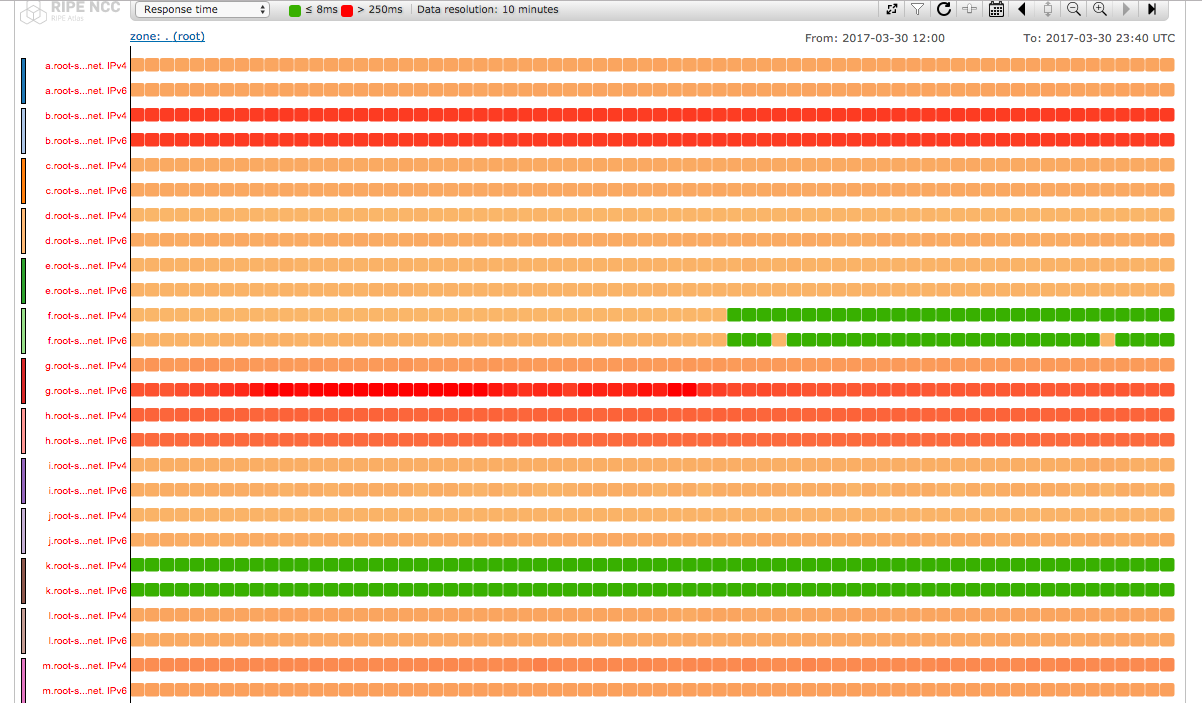 One of the optimizations that DNS resolvers do is preferring the faster root servers. As F-Root picked up speed, DNS resolvers also started sending it more traffic. Here you can see the aggregate number of queries received by each root letter per day, with an increase to F starting on March 30th.

One large public DNS resolver shared with us their internal metrics, where you can also see a large shift of traffic to F-Root as F-Root increased in speed.

When one external DNS monitor published their Root Server measurement report in June 2017, they mentioned F-Root’s increased performance. “9 more countries than in 2015 observed F-Root as the fastest — this is the biggest change across all of the root servers, so in this sense F-Root is “most improved.” F-Root has increasingly become the fastest root server in significant portions of Asia Pacific, Latin America and Eastern Europe.” They noted that “F-Root is now the fastest for roughly one quarter of the countries we tested from.”

We are happy to be working with ISC on delivering answers for F-Root and aim in the process to improve the speed and security of the F-Root server.