A letter from Cloudflare’s founders (2020)

Cloudflare launched on September 27, 2010 — 10 years ago today. Stopping to look back over the last 10 years is challenging in some ways because so much of who we are has changed radically. A decade ago when we launched we had a few thousand websites using us, our tiny office was above a nail salon in Palo Alto, our team could be counted on less than two hands, and our data center locations on one hand.

As the company grew, it would have been easy to stick with accelerating and protecting developers and small business websites and not see the broader picture. But, as this year has shown with crystal clarity, we all depend on the Internet for many aspects of our lives: for access to public information and services, to getting work done, for staying in touch with friends and loved ones, and, increasingly, for educating our children, ordering groceries, learning the latest dance moves, and so many other things. The Internet underpins much of what we do every day, and Cloudflare’s mission to help build a better Internet seems more and more important every day.

Over time Cloudflare has gone from an idea on a piece of paper to one of the largest networks in the world that powers millions of customers. Because we made our network to be flexible and programmable, what we’ve been able to do with it has expanded over time as well. Today we secure the Internet end-to-end — from companies’ infrastructure to individuals seeking a faster, more secure, more private connection. Our programmable, global network is at the core of everything we have been able to achieve so far.

This is also the approximate one-year anniversary of Cloudflare going public. At the time, we wrote our first founders' letter to the potential investors. We thought it made sense on this day, which we think of as our birthday, to reflect on the last year, as well as the last 10 years, and start a tradition of updating our original founders' letter on September 27th every year.

It's been quite a year for our business. Since our IPO, we've seen record expansion of new customers. That growth has come both from expanding our existing customers as well as winning new business from new customers.

The percentage of the Fortune 1,000 that pay for one or more of Cloudflare's services rose from 10% when we went public to more than 16% today. Across the web as a whole, according to W3Techs' data, over the last year Cloudflare has grown from 10.1% of the top 10 million websites using our services to 14.5% using them today. (Amazon CloudFront, in second place based on the number of websites they serve, grew from 0.8% to 0.9% over the same period.)

Every year to celebrate our birthday we've made it a tradition to launch products that surprise the market with new ways to expand how anyone can use our network. We think of them as gifts back to the Internet. Three years ago, for instance, we launched our edge computing platform called Workers. Today, just three years later, hundreds of thousands of developers are using Workers to build applications, many of which we believe would be impossible to build on any other platform.

This year we're once again launching a series of products to extend Cloudflare's capabilities and hopefully surprise and delight the Internet. One that we're especially excited about brings a new data model to Workers, allowing even more sophisticated applications to be built on the platform.

The Year of COVID

It is impossible to reflect on the last year and not see the impact of the COVID-19 pandemic on our business, our customers, our employees, as well our friends, colleagues, and loved ones in the greater community. It's heartening to think that for more than half of Cloudflare’s life as a public company our team has worked remote.

2020 was meant to be an Olympic year, but COVID-19 stopped that, like much else, from happening. Eight years ago, when Cloudflare was just two, the creator of the World Wide Web, Tim Berners-Lee, sent a message from the opening ceremony of the 2012 Olympics. That message read “This is for everyone” and the idea that the Internet is for all of us continues to be a key part of Cloudflare's ethos today. 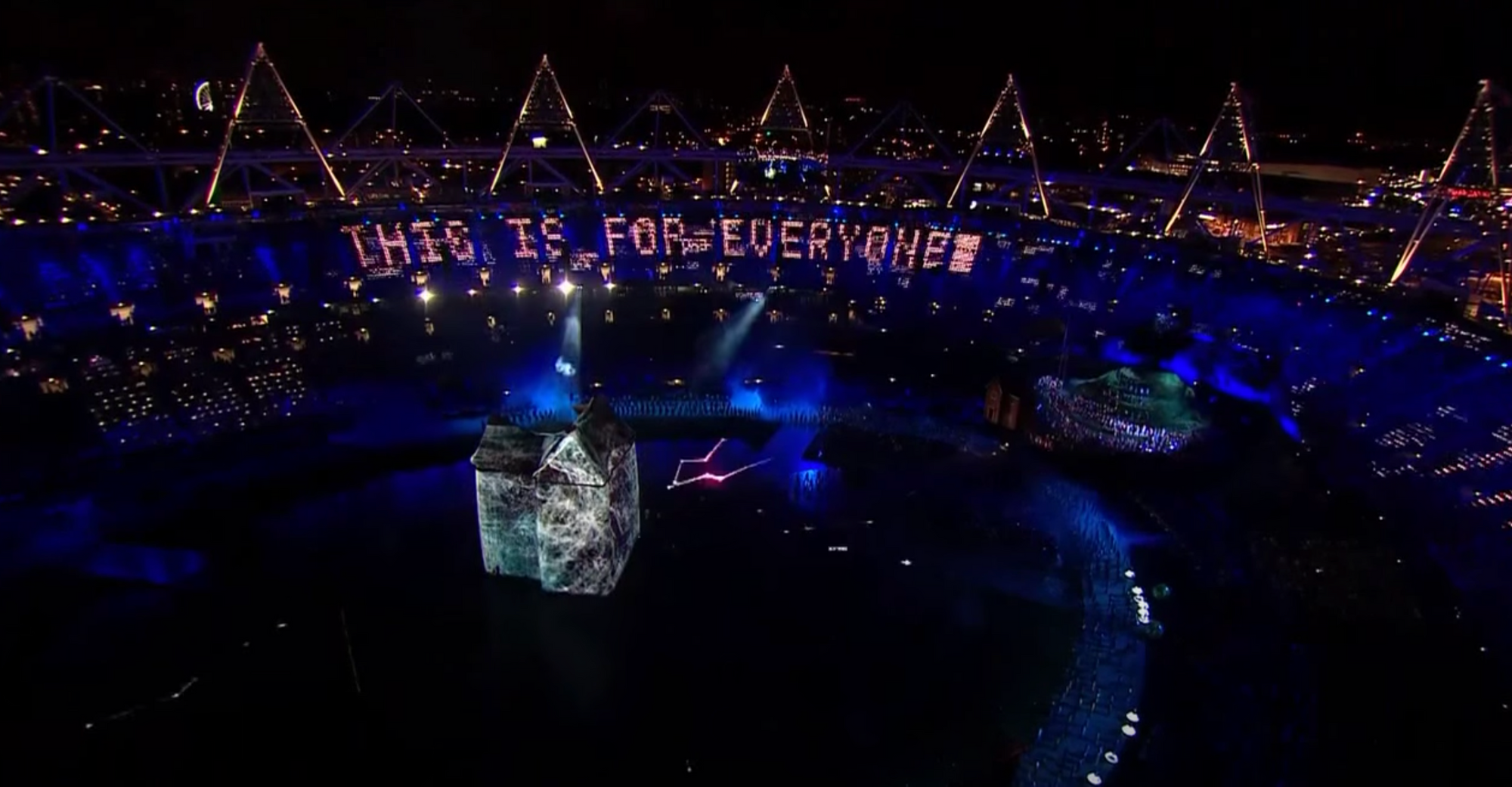 When we started Cloudflare we wanted to democratize what we thought were technologies only available to the richest and most Internet-focused organizations. We saw an opportunity to make available to everyone — from individual developers to small businesses to large corporations — the sorts of speed, protection, and reliability that, at the time, only the likes of Google, Amazon, and Facebook could afford.

Giving Back to the Internet

Over 10 years we’ve consistently rolled out the latest technologies, typically ahead of the rest of the industry, to everyone. And in doing so we’ve attracted employees, individuals, developers, customers to our platform. The Internet is for everyone and we’ve shown that a business can be very successful when we aim to serve everyone — large and small.

Something Steve Jobs said back in 1988 still resonates: “If you want to make a revolution, you've got to raise the lowest common denominator in every single machine." Although we aren’t selling machines, we think that’s right: democratizing features matters.

Just look at the scourge of DDoS attacks. Why should DDoS attack mitigation be expensive when it’s a plague on companies large and small? It shouldn’t, and we optimized our business to make it inexpensive for us and passed that on to our customers through Unmetered DDoS Mitigation — another feature we rolled out to celebrate our Birthday Week three years ago.

In 2014, also during Birthday Week, we launched Universal SSL, making encryption — something that had been expensive and difficult — free for all Cloudflare customers. The week we launched it we doubled the size of the encrypted web. Let’s Encrypt followed shortly after and, together, we’ve brought encryption to more than 90% of the web and made the little padlock in your browser something everyone can afford and should expect.

Helping Customers During Their Time of Need

In January of this year, we rolled out Cloudflare for Teams. The product was designed to replace the legacy VPNs and firewalls that were increasingly anachronistic as work moved to the cloud. Little did we know how much COVID-19 would accelerate their obsolescence and make Cloudflare for Teams essential.

Both of us sat on call after call in mid-March with at first small, then increasingly mid-sized, and eventually large and even governmental organizations who reached out to us looking for a way to survive as their teams shifted to working from home and their legacy hardware couldn't keep up. We made the decision to sacrifice short term profits in order to help businesses large and small get through this crisis by making Cloudflare for Teams free through September.

As we said during our Q1 earnings call, the superheros of this crisis are the medical professionals and scientists who are taking care of the sick and looking for a cure to the disease. But the faithful sidekick throughout has been the Internet. And, as one of the guardians of the Internet, we're proud of helping ensure it was fast, secure, and reliable around the world when it was needed most. We are proud of how Cloudflare's products could help the businesses continue to get work done during this unprecedented time by leaning even more on the Internet.

Meeting the Challenges Ahead

Giving back to the Internet is core to who we are, and we do not shy away from a challenge. And there are many challenges ahead. In a little over a month, the United States will hold elections. After the 2016 elections we, along with the rest of the world, were concerned to see technology intended to bring people together instead be used to subvert the democratic process. We decided we needed to do something to help prevent that from happening again.

Three and a half years ago, we launched the Athenian Project to provide free cybersecurity resources to any local, state, or federal officials helping administer elections in the United States. We couldn't have built Cloudflare into the company it is today without a stable government as a foundational platform. And, when that foundation is challenged, we believe it is our duty to lend our resources to defend it.

Today, we're helping secure election infrastructure in more than half of the states in the United States. And, over these last weeks before the election, our team is working around the clock to help ensure the process is fair and not disrupted by cyber attacks.

More challenges lie ahead and we won’t shy away from them. Well intentioned governments around the world are increasingly seeking to regulate the Internet to protect their citizens. While the aims are noble, the risk is creating a patchwork of laws that only the Internet giants can successfully navigate. We believe it is critical for us to engage in the conversations around these regulations and work to help ensure as operating online becomes more complex, we can continue to make the opportunities of the Internet created for us when we started Cloudflare available to future startups and entrepreneurs.

Fighting for the Internet

Over the last 10 years, it's been sad to watch some of the optimism around technology seem to fade. The perception of technology companies shifted from their being able to do no wrong to, today, their being able to do no right. And, as we've watched the industry develop, we've sympathized with that shift. Too many tech companies have abused customer data, ignored rules, violated privacy, and not been good citizens to the communities in which they operate and serve.

But we continue to believe what we started Cloudflare believing 10 years ago: the Internet itself is a force for good worth fighting to defend. We need to keep striving to make the Internet itself better — always on, always fast, always secure, always private, and available to everyone.

It's striking to think how much more disruptive the COVID-19 crisis could have been had it struck in 2010 not 2020. The difference today is a better Internet. We're proud of the role we've played in helping build that better Internet.

And, ten years in, we're just getting started.

From AMP to Signed Exchanges, Or How Innovation Happens at Cloudflare

This is the story of how we decided to work with Google to build Signed Exchanges support at Cloudflare. But, more generally, it's also a story of how Cloudflare thinks about building disruptive new products....

This week we celebrate Cloudflare's birthday. We launched the company 11 years ago tomorrow: September 27, 2010. It has been our tradition, since our first birthday, to use this week to launch innovative new products that we think of as our gift back to the Internet....

Cloudflare launched on September 27, 2010. This week we'll celebrate our 12th birthday. As has become our tradition, we'll be announcing a series of products that we think of as our gifts back to the Internet...

Each year we celebrate our launch on September 27, 2010 with a week of product announcements. We call this Birthday Week, but rather than receiving gifts, we give them away. This year is no different, except that it is… Cloudflare is 10 years old....