It's no secret that Cloudflare has been a big proponent of TLS 1.3, the newest edition of the TLS protocol that improves both speed and security, since we have made it available to our customers starting in 2016. However, for the longest time TLS 1.3 has been a work-in-progress which meant that the feature was disabled by default in our customers’ dashboards, at least until all the kinks in the protocol could be resolved.

With the specification finally nearing its official publication, and after several years of work (as well as 28 draft versions), we are happy to announce that the TLS 1.3 feature on Cloudflare is out of beta and will be enabled by default for all new zones. 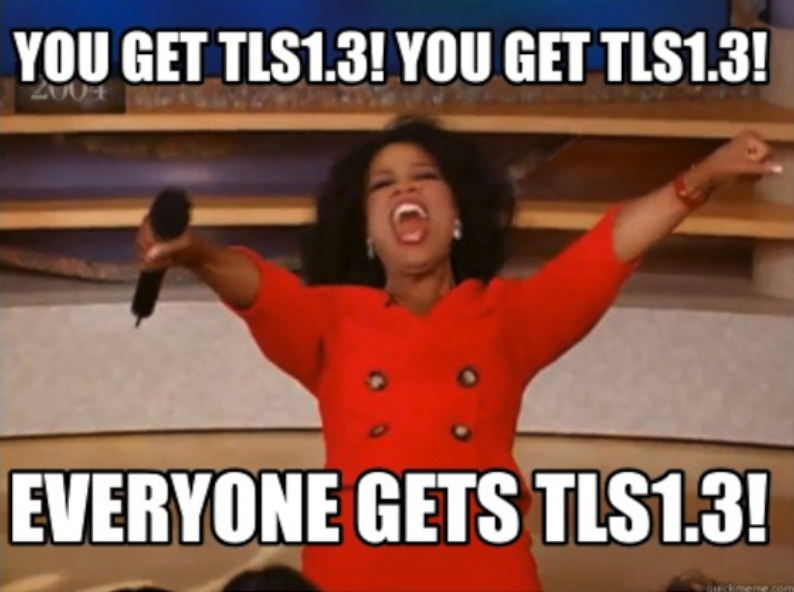 Custom image derived from YouTube video courtesy of OWN

For our Free and Pro customers not much changes, they already had TLS 1.3 enabled by default from the start. We have also decided to disable the 0-RTT feature by default for these plans (it was previously enabled by default as well), due to its inherent security properties. It will still be possible to explicitly enable it from the dashboard or the API (more on 0-RTT soon-ish in another blog post).

Our Business and Enterprise customers will now also get TLS 1.3 enabled by default for new zones (but will continue to have 0-RTT disabled). For existing Business customers that haven't made an explicit choice (that is, they haven't turned the feature on or off manually), we are also retroactively turning TLS 1.3 on.

What happened to the middleboxes?

Back in December we blogged about why TLS 1.3 still wasn't being widely adopted, the main reason being non-compliant middleboxes, network appliances designed to monitor and sometimes intercept HTTPS traffic.

Due to the fact that the TLS protocol hasn’t been updated for a long time (TLS 1.2 came out back in 2008, with fairly minimal changes compared to TLS 1.1), wrong assumptions about the protocol made by these appliances meant that some of the more invasive changes in TLS 1.3, which broke those assumptions, caused the middleboxes to misbehave, in the worst cases causing TLS connections passing through them to break.

Since then, new draft versions of the protocol have been discussed and published, providing additional measures (on top of the ones already adopted, like the “supported_versions” extension) to mitigate the impact caused by middleboxes. How?, you ask. The trick was to modify the TLS 1.3 protocol to look more like previous TLS versions, but without impacting the improved performance and security benefits the new version provides.

For example, the ChangeCipherSpec handshake message, which in previous versions of the protocol was used to notify the receiving party that subsequent records would be encrypted, was originally removed from TLS 1.3 since it had no purpose in the protocol anymore after the handshake algorithm was streamlined, but in order to avoid confusing middleboxes that expected to see the message on the wire, it was reintroduced even though the receiving endpoint will just ignore it.

Another point of contention was the fact that some middleboxes expect to see the Certificate messages sent by servers (usually to identify the end server, sometimes with nefarious purposes), but since TLS 1.3 moved that message to the encrypted portion of the handshake, it became invisible to the snooping boxes. The trick there was to make the TLS 1.3 handshake look like it was resuming a previous connection which means that, even in previous TLS versions, the Certificate message is omitted from plain text communication. This was achieved by populating the previously deprecated "session_id" field in the ClientHello message with a bogus value.

Adopting these changes meant that, while the protocol itself lost a bit of its original elegance (but without losing any of the security and performance), major browsers could finally enable TLS 1.3 by default for all of their users: Chrome enabled TLS 1.3 by default in version 65 while Firefox did so in version 60.

We can now go back to our metrics and see what all of this means for general TLS 1.3 adoption.

Back in December, only 0.06% of TLS connections to Cloudflare websites used TLS 1.3. Now, 5-6% do so, with this number steadily rising: 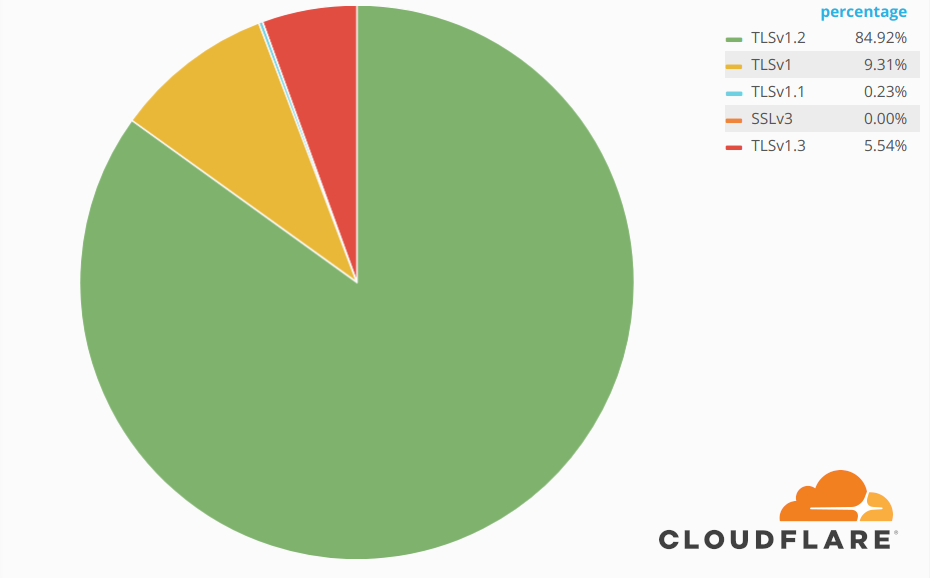 It’s worth noting that the current Firefox beta (v61) switched to using draft 28, from draft 23 (which Chrome also uses). The two draft versions are incompatible due to some minor wire changes that were adopted some time after draft 23 was published, but Cloudflare can speak both versions so there won’t be a dip in adoption once Firefox 61 becomes stable. Once the final TLS 1.3 version (that is draft 28) becomes an official RFC we will also support that alongside the previous draft versions, to avoid leaving behind slow to update clients.

The tremendous work required to specify, implement and deploy TLS 1.3 is finally starting to bear fruit, and adoption will without a doubt keep steadily increasing for some time: at the end of 2017 our CTO predicted that by the end of 2018 more than 50% of HTTPS connections will happen over TLS 1.3, and given the recent developments we are still confident that it is a reachable target.