Receiving the WSJ Award for Most Innovative Internet Technology Company 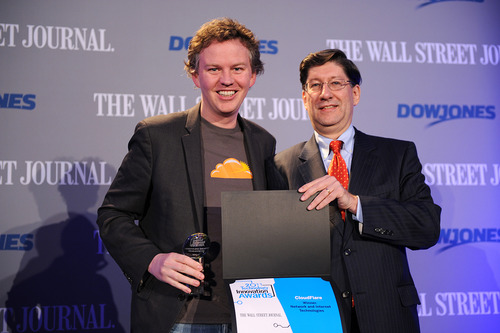 A few weeks ago the Wall Street Journal named CloudFlare the most innovative Networking & Internet Technology of 2011. We were pretty flattered given that winners from other categories included IBM for Watson (the Jeopardy-playing computer), a company that figured out how to create stem cells from any cell in your body, and another that used algae to produce oil and diesel fuels cheaper than drilling for fossil fuels.

On Tuesday, I traveled down to Redwood City to receive the award at the FASTech conference and pose for this picture which, I'm sure, will cause my mom to write in (probably to customer support) and tell me I need a haircut.

Every day Ian on our team pulls a "stat of the day." He asks the rest of us to guess the answer. Today's was: "How much has CloudFlare grown since January 1, 2011?" It's pretty incredible to realize the answer: our traffic has grown by more than 3,200% since January. And we're not slowing down. In the next few days, we'll cross having saved our users more than 2 petabytes of bandwidth. And, as we just got finished discussing during our Friday all-team B.E.E.R. meeting, if you knew what we had planned in 2012 you'd realize: we're just getting started.

Want to be a part of the ride? We're hiring.

Up and to the Right: Forrester Research Ranks CloudFlare as a “Leader” for DDoS Services Providers

Forrester Research, Inc. has released The Forrester Wave™: DDoS Services Providers, Q3 2015 report which ranks CloudFlare as a leader. How do you get placed “up and to the right”?...

We’re thrilled to announce the winners of our annual Channel and Alliance Partner Awards for 2021...