Kuala Lumpur joins the CloudFlare network as our 45th global point of presence (PoP). While this latest deployment comes only a day after the announcement of our expansion in Berlin (back-to-back!), it's been a long three years since we last crossed a new border in Asia. Kuala Lumpur expands our presence in the Asia-Pacific region to nine PoPs: Kuala Lumpur, Seoul, Tokyo, Osaka, Hong Kong, Singapore, Sydney, Melbourne and Auckland.

One of the difficulties of delivering content locally in certain parts of Asia (and in many other parts of the world for that matter) is that certain ISPs only connect with other ISPs in the same local Internet ecosystem outside of their national borders. In the absence of domestic interconnection, a request (e.g. an e-mail or web request) from one local ISP to another "boomerangs" outside of the national border before it is ultimately delivered to another local ISP. If you live or travel in certain parts of Asia, this is one of the leading culprits for why the web feels slow. The lack of a domestic and central interconnection point also makes it challenging for networks like CloudFlare, both technically and economically, to deliver the international content of our users both locally and ubiquitously. 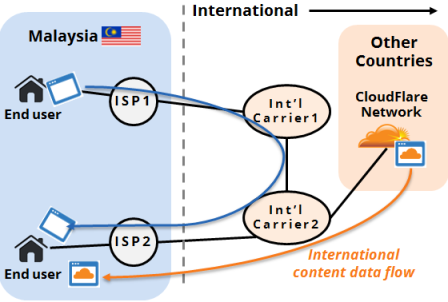 A blast from the past

Fortunately, in 2006, the government of Malaysia announced an initiative to form the first neutral Internet exchange point (IXP), MyIX, to facilitate and promote the local interconnection of ISPs. CloudFlare, as the latest member of MyIX, can now deliver the content of our 2.5 million+ users both centrally and locally. The result is significantly better load times and application performance for the 20 million Internet users in Malaysia and our customers. It is also great to see that the neutral IXP model is rapidly gaining traction among governments, policy makers and civil society throughout the world. 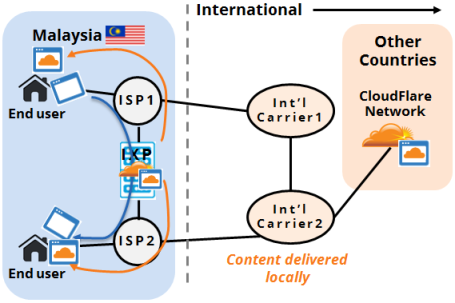 CloudFlare's goal is to help build a better web for everyone. With each new data center we get closer to building a network that will allow us to achieve that goal. While it may have taken us three years to cross a new border in Asia, it may just be a few days before we enter into another! Stay tuned because there's a lot more to come...