Our data center in Berlin is our 3rd in Germany following Frankfurt and Düsseldorf, 14th in Europe, and 44th globally. Berlin is of considerable importance not just because it is the capital of Europe's most populous country, but also because it is the 2nd largest city in the European Union by population* trailing only London. As of this moment, CloudFlare has a point of presence (PoP) in 7 out of Europe's 10 most populous cities, and we're headed for a perfect 10-for-10.

"I am one with the people of Berlin," best expresses our sentiments following this latest launch, but is more famously a reference to U.S. President John F. Kennedy's June 26th, 1963 speech in West Berlin (and also the source of an amusing urban legend). The story goes that Kennedy should have said "Ich bin Berliner" ("I am a citizen of Berlin"), but instead remarked "Ich bin ein Berliner" which translates as "I am a jelly doughnut." 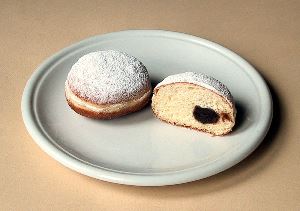 The Berliner: we treated ourselves to one a few in celebration of the launch

As it turns out, and despite decades of misinformation, Kennedy was linguistically correct. While in proper German an actual Berliner would say "Ich bin Berliner, " that wouldn't have been the right phrase for Kennedy to use as a non-resident. The addition of the indefinite article "ein" is required to express a metaphorical identification between subject and predicate. That being said, in any other context, it is indeed a way to say "I am a jelly doughnut."

Speaking on behalf of the entire team here at CloudFlare, we can empathize. Every new PoP we turn-up involves thousands of details and a fair share of "lost in translation" moments. Over the course of the following months we plan to launch a series of technical blog posts on how we rapidly deploy (and manage) an increasingly large and complex global infrastructure footprint.

In our Düsseldorf post we referenced the wave of imminent new CloudFlare datacenters to come over the remainder of the year. We've already added 14 new PoPs year to date, and we're not even half-way done. Stay tuned...

Cloudflare re-enforces commitment to security in Germany via BSIG audit