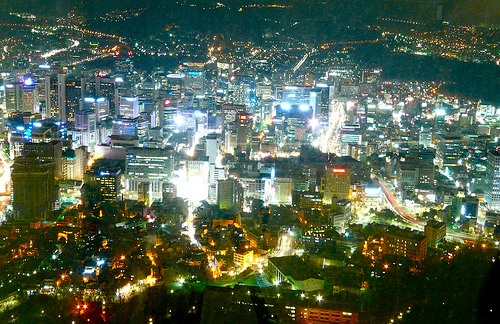 Seoul has invested heavily in making the Internet fast for web surfers in the region. Seoul was named one of the most connected cities in the world, with one of the highest penetrations of broadband in the world and 100Mbps commercial Internet connections available for as little as US$30/month.

Fast connections are great within the country, they often bottleneck when they have to travel across the over-subscribed trans-oceanic cables. Given that Korean traffic needs to pass over trans-oceanic cables to reach the rest of the Internet (unless there's a transit provider through North Korea we're not aware of) those fast connections can come to a crawl if they have to leave the country.

While fast Internet connections have a lot of positives, one of the challenges of fast, fat pipes is that they can be used to launch significant DDoS attacks. In Seoul, there has been a marked increase in large attacks launched from the country's super speed infrastructure.

Given all of this, CloudFlare is a perfect fit for Seoul. Since we cache content for sites on CloudFlare's network locally in Seoul those fast connections can remain fast end-to-end. Moreover, since we're good at mitigating DDoS attacks, Korean businesses faced with attacks from increasingly powerful local botnets can sign up for CloudFlare, stop the attacks, and still maintain the performance that the country has come to expect.

This is the last of the nine new cities we're launching as part of this latest expansion effort, but our ops and networking teams are already hard at work planning our next expansion wave. We know there are regions of the world that are in need of some CloudFlare love: South America, India, Africa, and China. All of them have their own unique challenges, but we're hard at work finding ways to overcome them.

CloudFlare's goal is to build a better web for everyone. With each new data center we get closer to building a network that will allow us to achieve that goal. Stay tuned because there's a lot more to come.