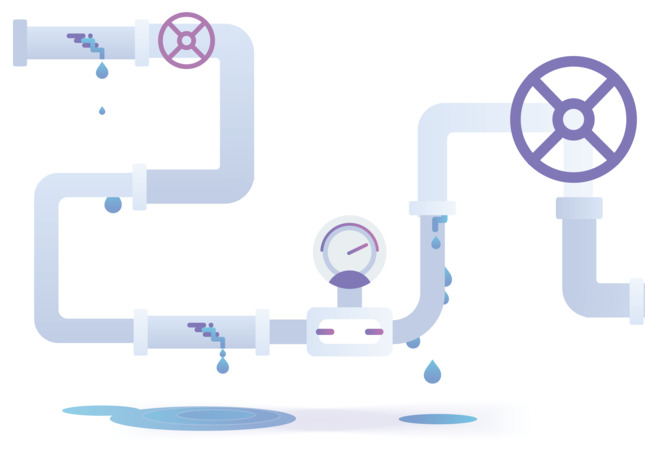 Passwords are an example of something you know; they were introduced in 1961 for computer authentication for a time-share computer in MIT. Shortly afterwards, a PhD researcher breached this system (by being able to simply download a list of unencrypted passwords) and used the time allocated to others on the computer.

As time has gone on; developers have continued to store passwords insecurely, and users have continued to set them weakly. Despite this, no viable alternative has been created for password security. To date, no system has been created that retains all the benefits that passwords offer as researchers have rarely considered real world constraints[1]. For example; when using fingerprints for authentication, engineers often forget that there is a sizable percentage of the population that do not have usable fingerprints or hardware upgrade costs.

In the 1970s, people started thinking about how to better store passwords and cryptographic hashing started to emerge.

Cryptographic hashes work like trapdoors; whilst it's easy to hash a password, it's far harder to turn that "hash" back into the original output (or computationally difficult for an ideal hashing algorithm). They are used in a lot of things from speeding up searching from files, to the One Time Password generators in banks.

Passwords should ideally use specialised hashing functions like Argon2, BCrypt or PBKDF2, they are modified to prevent Rainbow Table attacks.

If you were to hash the password, p4$$w0rd using the SHA-1 hashing algorithm, the output would be 6c067b3288c1b5c791afa04e12fb013ed2e84d10. This output is the same every time the algorithm is run. As a result, attackers are able to create Rainbow Tables which contain the hashes of common passwords and then this information is used to break password hashes (where the password and hash is listed in a Rainbow Table).

Algorithms like BCrypt essentially salt passwords before they hash them using a random string. This random string is stored alongside the password hash and is used to help make the password harder to crack by making the output unique. The hashing process is repeated many times (defined by a difficulty variable), each time adding the random salt onto the output of the hash and rerunning the hash computation.

For example; the BCrypt hash $2a$10$N9qo8uLOickgx2ZMRZoMyeIjZAgcfl7p92ldGxad68LJZdL17lhWy starts with $2a$10$ which indicates the algorithm used is BCrypt and contains a random salt of N9qo8uLOickgx2ZMRZoMye and a resulting hash of IjZAgcfl7p92ldGxad68LJZdL17lhWy. Storing the salt allows the password hash to be regenerated identically when the input is known.

Unfortunately; salting is no longer enough, passwords can be cracked quicker and quicker using modern GPUs (specialised at doing the same task over and over). When a site suffers a security breach, users passwords can be taken offline in database dumps in order to be cracked offline.

Additionally; websites that fail to rate limit login requests or use captchas, can be challenged by Brute Force attacks. For a given user, an attacker will repeatedly try different (but common) passwords until they gain access to a given users account.

Sometimes sites will lock users out after a handful of failed login attempts, attacks can instead be targeted to move on quickly to a new account after the most common set of a passwords has been attempted. Lists like the following (in some cases with many, many more passwords) can be attempted to breach an account: 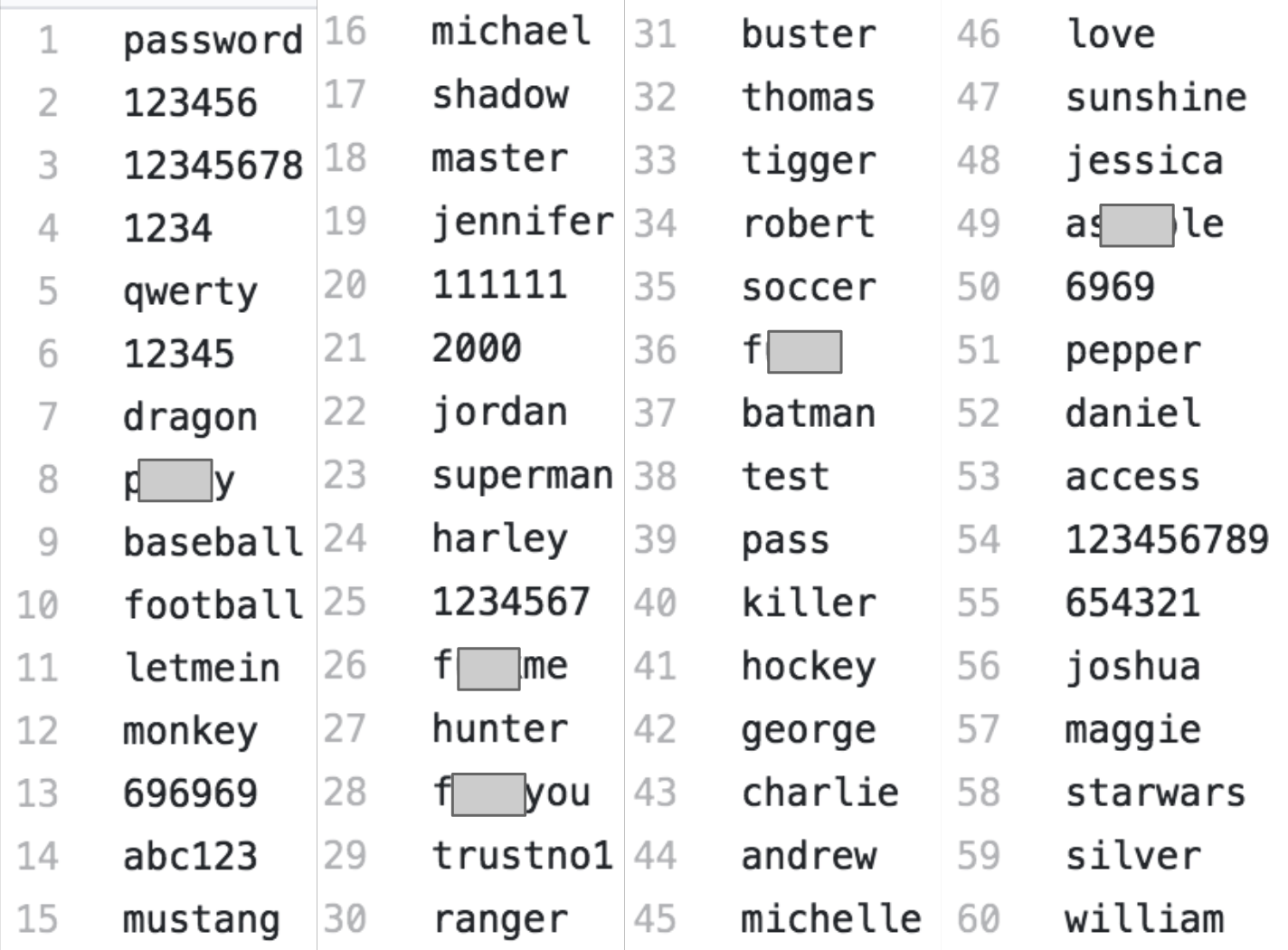 The industry has tried to combat this problem by requiring password composition rules; requiring users comply to complex rules before setting passwords (requiring a minimum amount of numbers or punctuation symbols). Research has shown that this work hasn't helped combat the problem of password reuse, weak passwords or users putting personal information in passwords.

Whilst it may seem that this is only a bad sign for websites that store passwords weakly, Credential Stuffing makes this problem even worse.

It is common for users to reuse passwords from site to site, meaning a username and password from a compromised website can be used to breach far more important information - like online banking gateways or government logins. When a password is reused - it takes just one website being breached, to gain access to others that a users has credentials for. 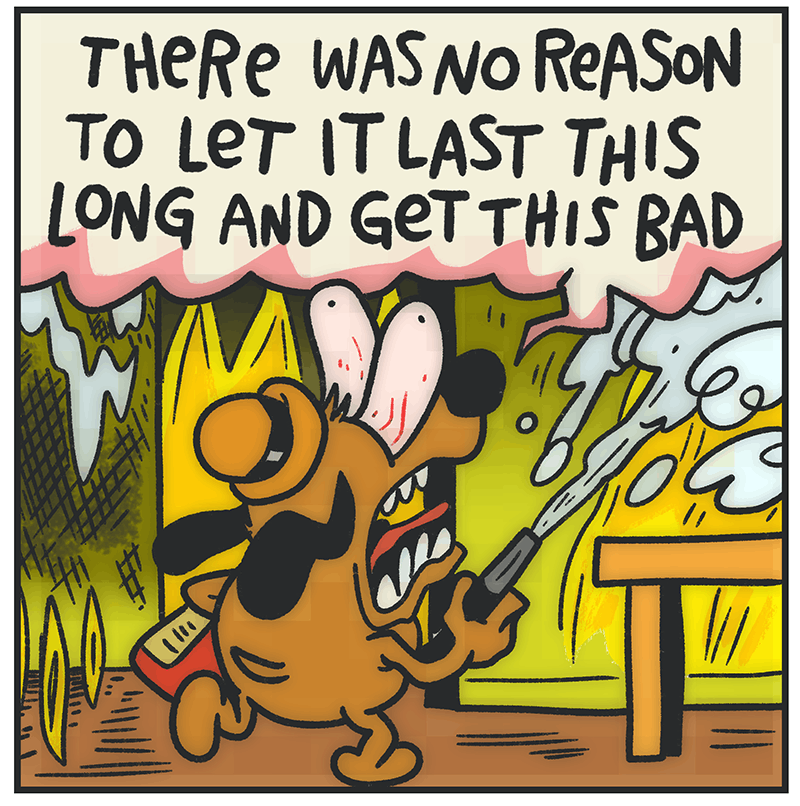 This Is Not Fine - The Nib

There are fundamentally three things that need to be done to fix this problem:

How Can I Secure Myself (or my Users)?

Before discussing the things we're doing, I wanted to briefly discuss what you can do to help protect yourself now. For most users, there are three steps you can immediately take to help yourself.

Use a Password Manager (like 1Password or LastPass) to set random, unique passwords for every site. Additionally, look to enable Two-Factor Authentication where possible; this uses something you have, in addition to the password you know, to validate you. This will mean, alongside your password, you have to enter a short-lived password from a device like your phone before being able to login to any site.

Two-Factor Authentication is supported on many of the worlds most popular social media, banking and shopping sites. You can find out how to enable it on popular websites at turnon2fa.com. If you are a developer, you should take efforts to ensure you support Two Factor Authentication.

Set a secure memorable password for your password manager; and yes, turn on Two-Factor Authentication for it (and keep your backup codes safe). You can find additional security tips (including tips on how to create a secure main password) in my blog post: Simple Cyber Security Tips.

Developers should look to abolish bad practice composition rules (and simplify them as much as possible). Password expiration policies do more harm than good, so seek to do away with them. For further information refer to the blog post by the UK's National Cyber Security Centre: The problems with forcing regular password expiry.

Finally; Troy Hunt has an excellent blog post on passwords for users and developers alike: Passwords Evolved: Authentication Guidance for the Modern Era

Developers should seek to build a culture of security in the organisations where they work; try and talk about security, talk about the benefits of challenging malicious login requests and talk about password hashing in simple terms.

If you're working on an open-source project that handles authentication; expose easy password hashing APIs - for example the password_hash, password_​needs_​rehash & password_verify functions in modern PHP versions.

We know that complex password composition rules are largely ineffective, and recent guidance has followed suit. A better alternative to composition rules is to block users from signing up with passwords which are known to have been breached. Under recent NIST guidance, it is a requirement, when storing or updating passwords, to ensure they do not contain values which are commonly used, expected or compromised[2].

This is easier said than done, the recent version of Troy Hunt's Pwned Passwords database contains over half a billion passwords (over 30 GB uncompressed). Whilst developers can use API services to check if a password is reused, this requires either sending the raw password, or the password in an unsalted hash. This can be especially problematic when multiple services handle authentication in a business, and each has to store a large quantity of passwords.

This is a problem I've started looking into recently; as part of our contribution to Troy Hunt's Pwned Passwords database, I have designed a range search API that allows developers to check if a password is reused without needing to share the password (even in hashed form) - instead only needing to send a short segment of the cryptographic hash used. You can find more information on this contribution in the post: Validating Leaked Passwords with k-Anonymity.