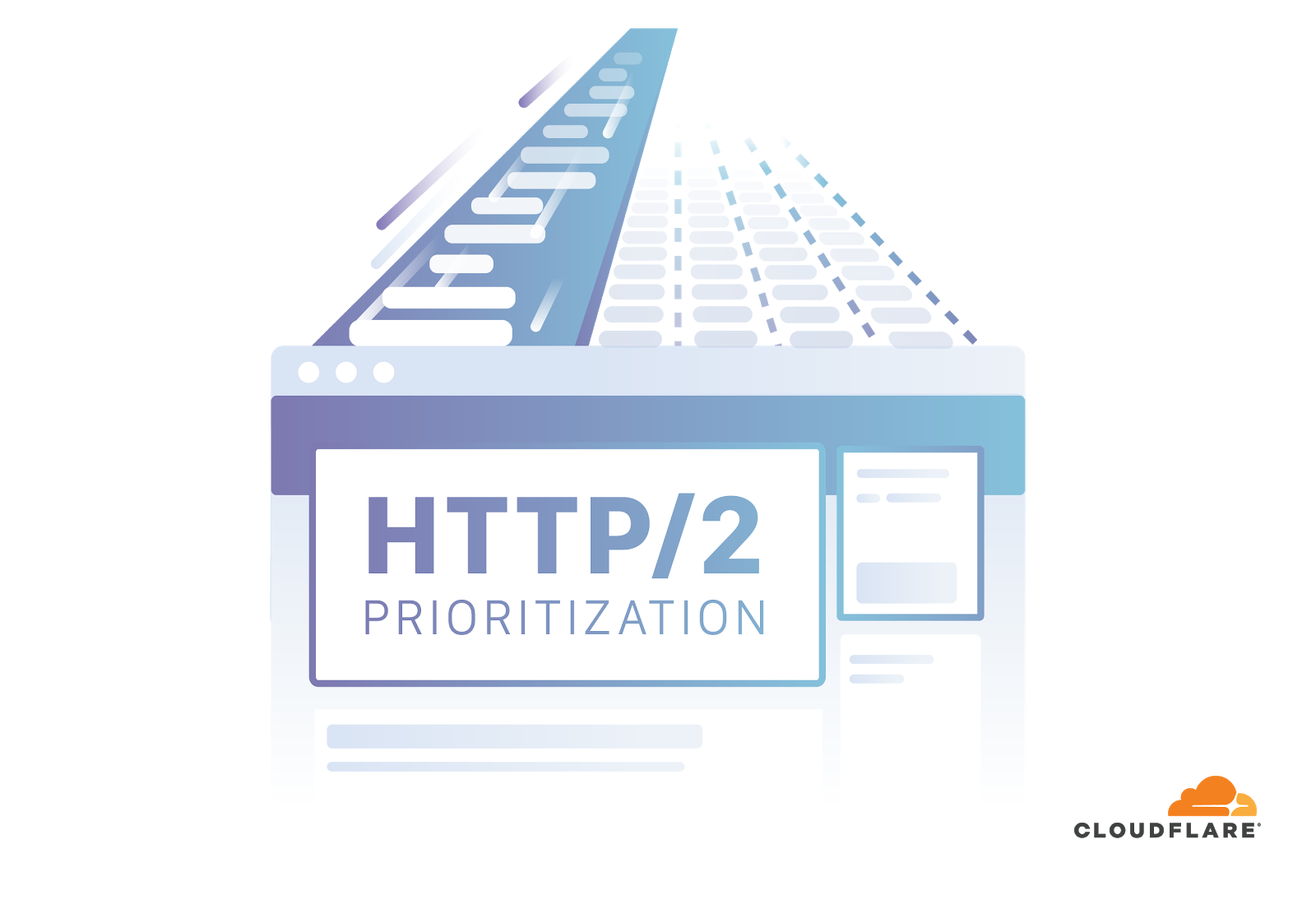 HTTP/2 promised a much faster web and Cloudflare rolled out HTTP/2 access for all our customers long, long ago. But one feature of HTTP/2, Prioritization, didn’t live up to the hype. Not because it was fundamentally broken but because of the way browsers implemented it.

Today Cloudflare is pushing out a change to HTTP/2 Prioritization that gives our servers control of prioritization decisions that truly make the web much faster.

Historically the browser has been in control of deciding how and when web content is loaded. Today we are introducing a radical change to that model for all paid plans that puts control into the hands of the site owner directly. Customers can enable “Enhanced HTTP/2 Prioritization” in the Speed tab of the Cloudflare dashboard: this overrides the browser defaults with an improved scheduling scheme that results in a significantly faster visitor experience (we have seen 50% faster on multiple occasions). With Cloudflare Workers, site owners can take this a step further and fully customize the experience to their specific needs.

Web pages are made up of dozens (sometimes hundreds) of separate resources that are loaded and assembled by the browser into the final displayed content. This includes the visible content the user interacts with (HTML, CSS, images) as well as the application logic (JavaScript) for the site itself, ads, analytics for tracking site usage and marketing tracking beacons. The sequencing of how those resources are loaded can have a significant impact on how long it takes for the user to see the content and interact with the page.

A browser is basically an HTML processing engine that goes through the HTML document and follows the instructions in order from the start of the HTML to the end, building the page as it goes along. References to stylesheets (CSS) tell the browser how to style the page content and the browser will delay displaying content until it has loaded the stylesheet (so it knows how to style the content it is going to display). Scripts referenced in the document can have several different behaviors. If the script is tagged as “async” or “defer” the browser can keep processing the document and just run the script code whenever the scripts are available. If the scripts are not tagged as async or defer then the browser MUST stop processing the document until the script has downloaded and executed before continuing. These are referred to as “blocking” scripts because they block the browser from continuing to process the document until they have been loaded and executed.

The browser is generally in charge of determining the order of loading the different resources it needs to build the page and to continue processing the document. In the case of HTTP/1.x, the browser is limited in how many things it can request from any one server at a time (generally 6 connections and only one resource at a time per connection) so the ordering is strictly controlled by the browser by how things are requested. With HTTP/2 things change pretty significantly. The browser can request all of the resources at once (at least as soon as it knows about them) and it provides detailed instructions to the server for how the resources should be delivered.

For most parts of the page loading cycle there is an optimal ordering of the resources that will result in the fastest user experience (and the difference between optimal and not can be significant - as much as a 50% improvement or more).

As described above, early in the page load cycle before the browser can render any content it is blocked on the CSS and blocking JavaScript in the <head> section of the HTML. During that part of the loading cycle it is best for 100% of the connection bandwidth to be used to download the blocking resources and for them to be downloaded one at a time in the order they are defined in the HTML. That lets the browser parse and execute each item while it is downloading the next blocking resource, allowing the download and execution to be pipelined. 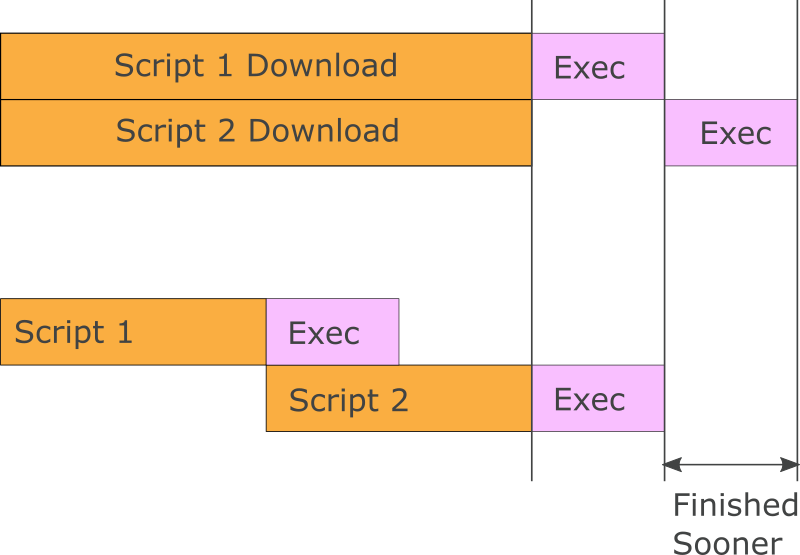 The scripts take the same amount of time to download when downloaded in parallel or one after the other but by downloading them sequentially the first script can be processed and execute while the second script is downloading.

Once the render-blocking content has loaded things get a little more interesting and the optimal loading may depend on the specific site or even business priorities (user content vs ads vs analytics, etc). Fonts in particular can be difficult as the browser only discovers what fonts it needs after the stylesheets have been applied to the content that is about to be displayed so by the time the browser knows about a font, it is needed to display text that is already ready to be drawn to the screen. Any delays in getting the font loaded end up as periods with blank text on the screen (or text displayed using the wrong font).

Generally there are some tradeoffs that need to be considered:

Weighing the tradeoffs, one strategy that works well in most cases is:

For illustrative purposes, we will use a simplified product category page from a typical e-commerce site. In this example the page has:

For simplicity, we will assume that all of the resources are the same size and each takes 1 second to download on the visitor’s connection. Loading everything takes a total of 20 seconds, but HOW it is loaded can have a huge impact to the experience.

This is what the described optimal loading would look like in the browser as the resources load:

All of the current browser engines implement different prioritization strategies, none of which are optimal.

Microsoft Edge and Internet Explorer do not support prioritization so everything falls back to the HTTP/2 default which is to load everything in parallel, splitting the bandwidth evenly among everything. Microsoft Edge is moving to use the Chromium browser engine in future Windows releases which will help improve the situation. In our example page this means that the browser is stuck in the head for the majority of the loading time since the images are slowing down the transfer of the blocking scripts and stylesheets.

Visually that results in a pretty painful experience of staring at a blank screen for 19 seconds before most of the content displays, followed by a 1-second delay for the text to display. Be patient when watching the animated progress because for the 19 seconds of blank screen it may feel like nothing is happening (even though it is):

While similar to Edge in that everything downloads at the same time, by allocating more bandwidth to the render-blocking resources Safari can display the content much sooner:

Firefox builds a dependency tree that groups resources and then schedules the groups to either load one after another or to share bandwidth between the groups. Within a given group the resources share bandwidth and download concurrently. The images are scheduled to load after the render-blocking stylesheets and to load in parallel but the render-blocking scripts and stylesheets also load in parallel and do not get the benefits of pipelining.

In our example case this ends up being a slightly faster experience than with Safari since the images are delayed until after the stylesheets complete:

Chrome (and all Chromium-based browsers) prioritizes resources into a list. This works really well for the render-blocking content that benefits from loading in order but works less well for images. Each image loads to 100% completion before starting the next image.

In practice this is almost as good as the optimal loading case with the only difference being that the images load one at a time instead of in parallel:

Visually, the impact can be quite dramatic, even though they all take the same amount of time to technically load all of the content:

Per the specification, HTTP/2 prioritization is a dependency tree that requires full knowledge of all of the in-flight requests to be able to prioritize resources against each other. That allows for incredibly complex strategies but is difficult to implement well on either the browser or server side (as evidenced by the different browser strategies and varying levels of server support). To make prioritization easier to manage we have developed a simpler prioritization scheme that still has all of the flexibility needed for optimal scheduling.

The Cloudflare prioritization scheme consists of 64 priority “levels” and within each priority level there are groups of resources that determine how the connection is shared between them: 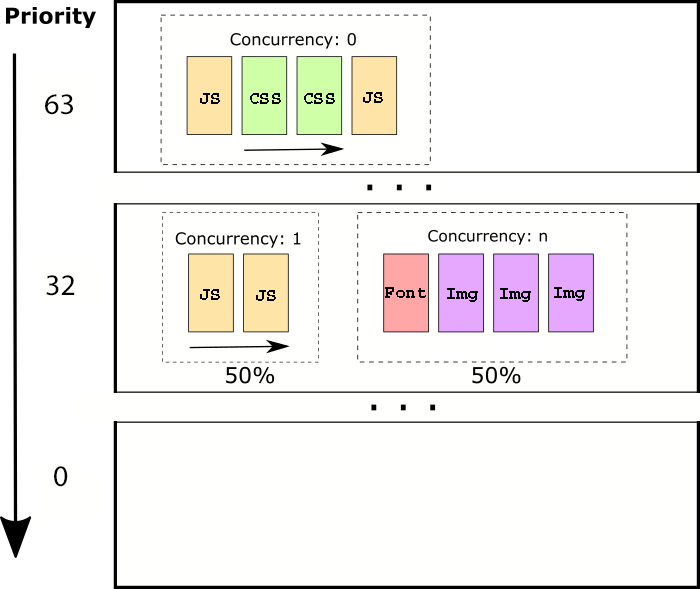 Within a given priority level, there are 3 different “concurrency” groups:

When enabled, the enhanced prioritization implements the “optimal” scheduling of resources described above. The specific prioritizations applied look like this: 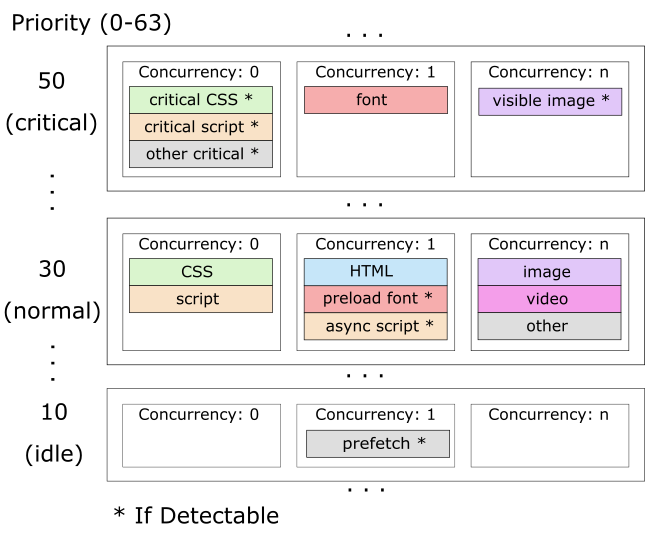 This prioritization scheme allows sending the render-blocking content serially, followed by the visible images in parallel and then the rest of the page content with some level of sharing to balance application and content loading. The “* If Detectable” caveat is that not all browsers differentiate between the different types of stylesheets and scripts but it will still be significantly faster in all cases. 50% faster by default, particularly for Edge and Safari visitors is not unusual:

Faster-by-default is great but where things get really interesting is that the ability to configure the prioritization is also exposed to Cloudflare Workers so sites can override the default prioritization for resources or implement their own complete prioritization schemes.

With this level of flexibility a site can tweak resource prioritization to meet their needs. Boosting the priority of some critical async scripts for example or increasing the priority of hero images before the browser has identified that they are in the viewport.

To help inform any prioritization decisions, the Workers runtime also exposes the browser-requested prioritization information in the request object passed in to the Worker’s fetch event listener (request.cf.requestPriority). The incoming requested priority is a semicolon-delimited list of attributes that looks something like this: “weight=192;exclusive=0;group=3;group-weight=127”.

This is Just the Beginning

The ability to tune and control the prioritization of responses is the basic building block that a lot of future work will benefit from. We will be implementing our own advanced optimizations on top of it but by exposing it in Workers we have also opened it up to sites and researchers to experiment with different prioritization strategies. With the Apps Marketplace it is also possible for companies to build new optimization services on top of the Workers platform and make it available to other sites to use.

If you are on a Pro plan or above, head over to the speed tab in the Cloudflare dashboard and turn on “Enhanced HTTP/2 Prioritization” to accelerate your site.

We recently ran a measurement experiment where we used Real User Measurement (RUM) data from the standard browser API to test the performance of Cloudflare and others in real-world conditions across the globe....

Using Rust and Cloudflare Workers helps us quickly iterate and deliver product improvements over the coming weeks and months....

Today, as part of Speed Week, we’ll break down the other side of the Magic: how using Cloudflare can automatically make your entire network faster....