It's 2016 and almost every site using Cloudflare (more than 4 million of them) is using IPv6. Because of this, Cloudflare sees significant IPv6 traffic globally where networks have enabled IPv6 to the consumer.

Why IPv6? Because fast internet.

IPv6 is faster for two reasons. The first is that many major operating systems and browsers like iOS, MacOS, Chrome and Firefox impose anywhere from a 25ms to 300ms artificial delay on connections made over IPv4. The second is that some mobile networks won’t need to perform extra v4 -> v6 and v6 -> v4 translations to connect visitors to IPv6 enabled sites if the phone is only assigned an IPv6 address. (IPv6-only phones are becoming very common. If you have a phone on T-Mobile, Telstra, SK Telecom, Orange, or EE UK, to name a few, it’s likely you’re v6-only.)

How much faster is IPv6? Our data shows that visitors connecting over IPv6 were able to connect and load pages in 27% less time than visitors connecting over IPv4. LinkedIn found an even more dramatic effect, with up to a 40% performance boost on mobile connections over IPv6. Facebook also found a significant performance increase, around 10-15% on IPv6.

Who and what is driving IPv6?

IPv6 is clearly important for driving a faster, better internet, so who is driving IPv6 adoption?

In terms of countries, Belgium leads by a mile. Over the last 30 days, 56.47% of traffic (in bytes) to Belgians on Cloudflare has been over IPv6. This is largely due to Telenet, an ISP in Belgium, doing almost 96.8% of their traffic over IPv6!

*The Irish numbers are artificially high due to several of Facebook’s IPv6 ranges being registered in Ireland. Facebook does an enormous amount of traffic over IPv6 –– 81% of Facebook’s traffic through Cloudflare is IPv6. In fact, Facebook’s crawling over IPv6 actually accounts for 6.9% of Cloudflare’s total outbound IPv6 traffic.

If you look just 6 months ago, less than 1% of India’s traffic was over IPv6. India has experienced an amazing rise in IPv6 connectivity, especially over the last month and a half.

The US is ranked 17th on the global list at 8.78%. And since we have a Canadian co-founder (and three Canadian PoPs), it hasn’t gone unnoticed at Cloudflare that Canada is just beating the US in 16th place at 9.14%.

In mobile, iOS sends slightly more traffic than Android over IPv6, with iOS sending about a quarter of its traffic (23.5%) and Android sending about one fifth (18.7%).

Here’s the full breakdown of browsers and operating systems to explain the effect of OS and browser on the percentage of IPv6 traffic. In it, you can see some interesting things, for example, iOS and ChromeOS apps tend to use IPv6 a lot more than other operating systems. Also, Chrome on mobile sends about twice as much IPv6 traffic than Chrome on desktop.

Below you can see the net effect of using a specific browser or operating system on IPv6 traffic: 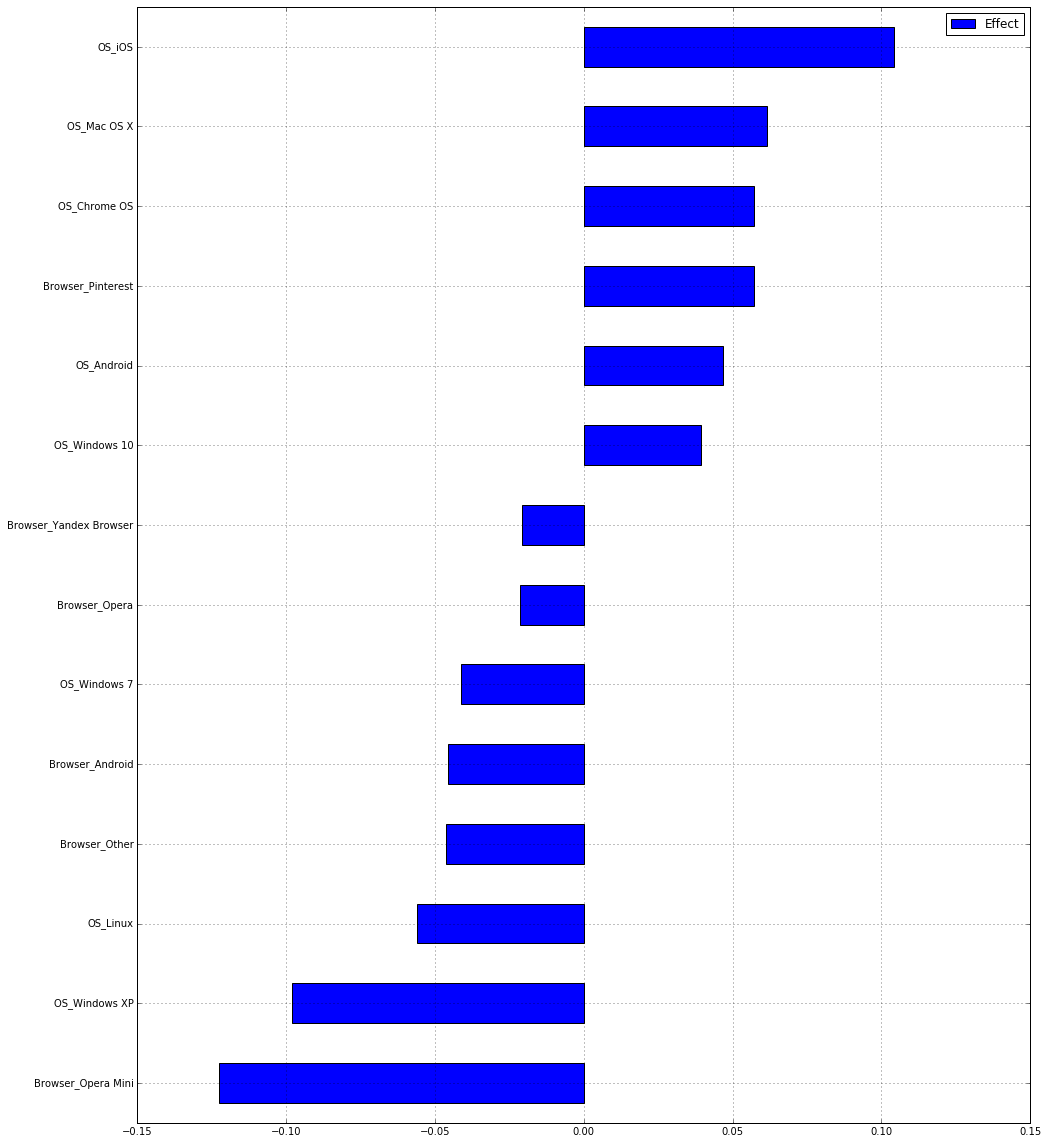 Even more interesting is that while only 10.97% of our total DNS traffic is over IPv6, 22.03% of our DNS packet floods are IPv6 as well as IPv4 (we see no IPv6-only attacks, all of the attacks we see on IPv6 are also seen on IPv4).

Making the push for IPv6

At Cloudflare we weren’t happy with only hundreds of thousands of IPv6-enabled websites. We wanted the millions and millions of Cloudflare customers to have IPv6. Over the last few months, we have been carefully enabling IPv6 for around 100,000 sites a day, all the time monitoring how our systems operated and how our traffic behaved. We also monitored customer support and of course, social media.

People noticed. People were happy. People posted what they saw! 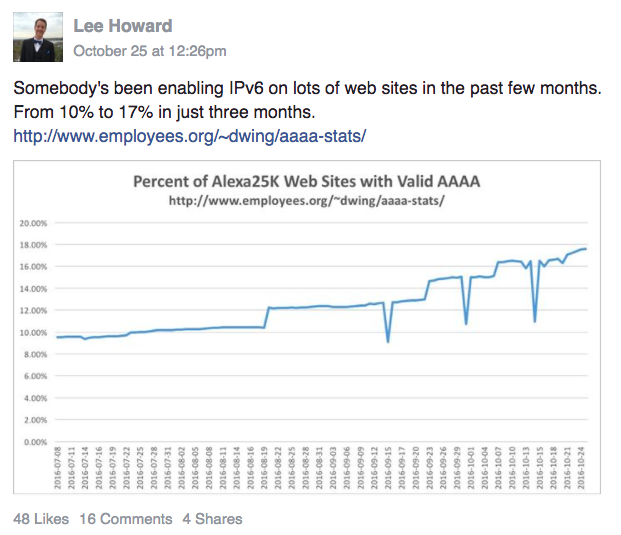 Some with a long range view:

Some zoomed into the last few months:

In both of the above graphs, you can really see the impact of Cloudflare enabling IPv6 for all of our customers’ sites, starting in August and wrapping up this week. Below is one more public measurement from Eric Vyncke where you can see the effect on world IPv6 measurements: 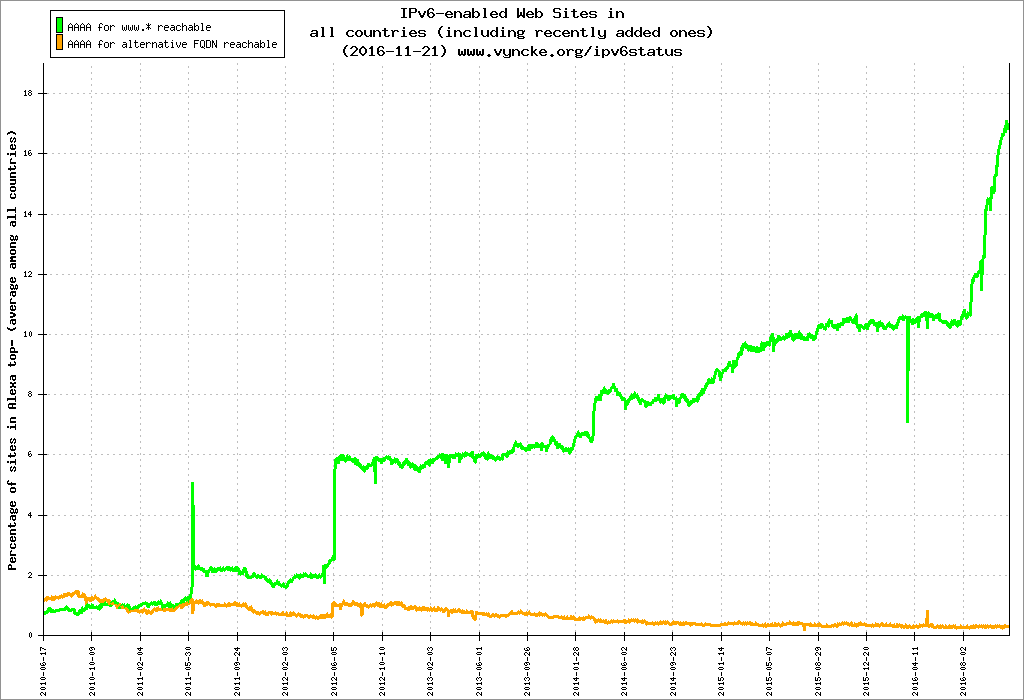 The IETF and IPv6

As of a late 2016, the IETF’s Internet Architecture Board has taken one more step in its path towards v6 adoption. It's taken the bold step of saying that new protocols don't need to be v4 backward compatible. This can usher-in some great new protocol designs and solutions that simply don't need to live in v4's legacy world. At Cloudflare we've always been aggressive with our desire to provide our customers cutting edge solutions. We can't wait to see what's cooking!

Along with the increased bandwidth observed, at Cloudflare, we are seeing a solid increase in unique IPv6 addresses seen.

Cloudflare is committed to bringing the most up to date, fastest and most secure technologies to our customers. We are committed to IPv6, TLS 1.3 and ubiquitous DNSSEC. Just like we'd never go back to an unencrypted life, there's no going back to a v4-only world.