The DDoS That Knocked Spamhaus Offline (And How We Mitigated It)

At CloudFlare, we deal with large DDoS attacks every day. Usually, these attacks are directed at large companies or organizations that are reluctant to talk about their details. It's fun, therefore, whenever we have a customer that is willing to let us tell the story of an attack they saw and how we mitigated it. This is one of those stories.

Yesterday, Tuesday, March 19, 2013, CloudFlare was contacted by the non-profit anti-spam organization Spamhaus. They were suffering a large DDoS attack against their website and asked if we could help mitigate the attack.

Spamhaus provides one of the key backbones that underpins much of the anti-spam filtering online. Run by a tireless team of volunteers, Spamhaus patrols the Internet for spammers and publishes a list of the servers they use to send their messages in order to empower email system administrators to filter unwanted messages. Spamhaus's services are so pervasive and important to the operation of the Internet's email architecture that, when a lawsuit threatened to shut the service down, industry experts testified [PDF], full disclosure: I wrote the brief back in the day] that doing so risked literally breaking email since Spamhaus is directly or indirectly responsible for filtering as much as 80% of daily spam messages.

Beginning on March 18, the Spamhaus site came under attack. The attack was large enough that the Spamhaus team wasn't sure of its size when they contacted us. It was sufficiently large to fully saturate their connection to the rest of the Internet and knock their site offline. These very large attacks, which are known as Layer 3 attacks, are difficult to stop with any on-premise solution. Put simply: if you have a router with a 10Gbps port, and someone sends you 11Gbps of traffic, it doesn't matter what intelligent software you have to stop the attack because your network link is completely saturated. 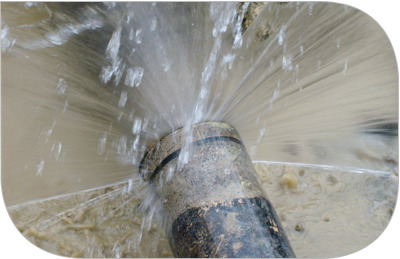 While we don't know who was behind this attack, Spamhaus has made plenty of enemies over the years. Spammers aren't always the most lovable of individuals and Spamhaus has been threatened, sued, and DDoSed regularly. Spamhaus's blocklists are distributed via DNS and there is a long list of volunteer organizations that mirror their DNS infrastructure in order to ensure it is resilient to attacks. The website, however, was unreachable.

Filling Up the Series of Tubes

Very large Layer 3 attacks are nearly always originated from a number of sources. These many sources each send traffic to a single Internet location, effectively creating a tidal wave that overwhelms the target's resources. In this sense, the attack is distributed (the first D in DDoS -- Distributed Denial of Service). The sources of attack traffic can be a group of individuals working together (e.g., the Anonymous LOIC model, although this is Layer 7 traffic and even at high volumes usually much smaller in volume than other methods), a botnet of compromised PCs, a botnet of compromised servers, misconfigured DNS resolvers, or even home Internet routers with weak passwords.

Since an attacker attempting to launch a Layer 3 attack doesn't care about receiving a response to the requests they send, the packets that make up the attack do not have to be accurate or correctly formatted. Attackers will regularly spoof all the information in the attack packets, including the source IP, making it look like the attack is coming from a virtually infinite number of sources. Since packets data can be fully randomized, using techniques like IP filtering even upstream becomes virtually useless.

Spamhaus signed up for CloudFlare on Tuesday afternoon and we immediately mitigated the attack, making the site once again reachable. (More on how we did that below.) Once on our network, we also began recording data about the attack. At first, the attack was relatively modest (around 10Gbps). There was a brief spike around 16:30 UTC, likely a test, that lasted approximately 10 minutes. Then, around 21:30 UTC, the attackers let loose a very large wave.

The graph below is generated from bandwidth samples across a number of the routers that sit in front of servers we use for DDoS scrubbing. The green area represents in-bound requests and the blue line represents out-bound responses. While there is always some attack traffic on our network, it's easy to see when the attack against Spamhaus started and then began to taper off around 02:30 UTC on March 20, 2013. As I'm writing this at 16:15 UTC on March 20, 2013, it appears the attack is picking up again.

How to Generate a 75Gbps DDoS

The largest source of attack traffic against Spamhaus came from DNS reflection. I've written about these attacks before and in the last year they have become the source of the largest Layer 3 DDoS attacks we see (sometimes well exceeding 100Gbps). Open DNS resolvers are quickly becoming the scourge of the Internet and the size of these attacks will only continue to rise until all providers make a concerted effort to close them. (It also makes sense to implement BCP-38, but that's a topic for another post another time.)

The basic technique of a DNS reflection attack is to send a request for a large DNS zone file with the source IP address spoofed to be the intended victim to a large number of open DNS resolvers. The resolvers then respond to the request, sending the large DNS zone answer to the intended victim. The attackers' requests themselves are only a fraction of the size of the responses, meaning the attacker can effectively amplify their attack to many times the size of the bandwidth resources they themselves control.

In the Spamhaus case, the attacker was sending requests for the DNS zone file for ripe.net to open DNS resolvers. The attacker spoofed the CloudFlare IPs we'd issued for Spamhaus as the source in their DNS requests. The open resolvers responded with DNS zone file, generating collectively approximately 75Gbps of attack traffic. The requests were likely approximately 36 bytes long (e.g. dig ANY ripe.net @X.X.X.X+edns=0 +bufsize=4096, where X.X.X.X is replaced with the IP address of an open DNS resolver) and the response was approximately 3,000 bytes, translating to a 100x amplification factor.

We recorded over 30,000 unique DNS resolvers involved in the attack. This translates to each open DNS resolver sending an average of 2.5Mbps, which is small enough to fly under the radar of most DNS resolvers. Because the attacker used a DNS amplification, the attacker only needed to control a botnet or cluster of servers to generate 750Mbps -- which is possible with a small sized botnet or a handful of AWS instances. It is worth repeating: open DNS resolvers are the scourge of the Internet and these attacks will become more common and large until service providers take serious efforts to close them.

How You Mitigate a 75Gbps DDoS

While large Layer 3 attacks are difficult for an on-premise DDoS solution to mitigate, CloudFlare's network was specifically designed from the beginning to stop these types of attacks. We make heavy use of Anycast. That means the same IP address is announced from every one of our 23 worldwide data centers. The network itself load balances requests to the nearest facility. Under normal circumstances, this helps us ensure a visitor is routed to the nearest data center on our network.

When there's an attack, Anycast serves to effectively dilute it by spreading it across our facilities. Since every data center announces the same IP address for any CloudFlare customer, traffic cannot be concentrated in any one location. Instead of the attack being many-to-one, it becomes many-to-many with no single point on the network acting as a bottleneck.

Once diluted, the attack becomes relatively easy to stop at each of our data centers. Because CloudFlare acts as a virtual shield in front of our customers sites, with Layer 3 attacks none of the attack traffic reaches the customer's servers. Traffic to Spamhaus's network dropped to below the levels when the attack started as soon as they signed up for our service.

While the majority of the traffic involved in the attack was DNS reflection, the attacker threw in a few other attack methods as well. One was a so-called ACK reflection attack. When a TCP connection is established there is a handshake. The server initiating the TCP session first sends a SYN (for synchronize) request to the receiving server. The receiving server responds with an ACK (for acknowledge). After that handshake, data can be exchanged.

In an ACK reflection, the attacker sends a number of SYN packets to servers with a spoofed source IP address pointing to the intended victim. The servers then respond to the victim's IP with an ACK. Like the DNS reflection attack, this disguises the source of the attack, making it appear to come from legitimate servers. However, unlike the DNS reflection attack, there is no amplification factor: the bandwidth from the ACKs is symmetrical to the bandwidth the attacker has to generate the SYNs. CloudFlare is configured to drop unmatched ACKs, which mitigates these types of attacks.

Whenever we see one of these large attacks, network operators will write to us upset that we are attacking their infrastructure with abusive DNS queries or SYN floods. In fact, it is their infrastructure that is being used to reflect an attack at us. By working with and educating network operators, they clean up their network which helps to solve the root cause of these large attacks.

Finally, it's worth noting how similar this battle against DDoS attacks and open DNS relays is with Spamhaus's original fight. If DDoS is the network scourge of tomorrow, spam was its clear predecessor. Paul Vixie, the father of the DNSBL, set out in 1997 to use DNS to help shut down the spam source of the day: open email relays. These relays were being used to disguise the origin of spam messages, making them more difficult to block. What was needed was a list of mail relays that mail serves could query against and decide whether to accept messages.

While it wasn't originally designed with the idea in mind, DNS proved a highly scalable and efficient means to distribute a queryable list of open mail relays that email service providers could use to block unwanted messages. Spamhaus arose as one of the most respected and widely used DNSBLs, effectively blocking a huge percentage of daily spam volume.

As open mail relays were shut, spammers turned to virus writers to create botnets that could be used to relay spam. Spamhaus expanded their operations to list the IPs of known botnets, trying to stay ahead of spammers. CloudFlare's own history grew out of Project Honey Pot, which started as an automated service to track the resources used by spammers and publishes the HTTP:BL.

Today, as Spamhaus's success has eroded the business model of spammers, botnet operators are increasingly renting their networks to launch DDoS attacks. At the same time, DNSBLs proved that there were many functions that the DNS protocol could be used for, encouraging many people to tinker with installing their own DNS resolvers. Unfortunately, these DNS resolvers are often mis-configured and left open to abuse, making them the DDoS equivalent of the open mail relay.

If you're running a network, take a second to make sure you've closed any open resolvers before DDoS explodes into an even worse problem than it already is.