In Oslo, we have now built our third data center in Scandinavia. This joins our existing facilities in Stockholm and Copenhagen. With a data center in Norway, we recognize an important country that stands above others with a staggering 95.05% of the population having Internet connectivity. This Internet penetration rate is the fourth best in the world. For reference, the Internet penetration rate in the US is 84%, the UK is 90% and Egypt, where we deployed our last data center it is only 50%

At 59.9500° N, Oslo is also the “northernmost” CloudFlare data center on our network map.

Oslo, according to the Norwegian Sagas is over 1,000 years old. CloudFlare has built itself into a facility just a handful of years old and while we respect all the wonderful history and tradition associated with Norway, we hope the locals appreciate our 21st century choice.

Norway has a very important position within the history of the Internet (well the ARPANET actually). In June 1973, the Royal Radar Establishment in Norway became one of the first international connections to the ARPANET. It seems CloudFlare is just catching up with that history.

Norwegian domains end in .NO and Norway’s country TLD operator, NORID, recently upgraded their support to allow CloudFlare users to correctly setup their domains with full DNSSEC protection. NORID added support for ECDSA Algorithm-13, which means that all .NO domains can now use DNSSEC with CloudFlare. We are grateful for their quick actions in this area and hope that returning the favor of adding Oslo to our map continues this road to better protection of DNS traffic.

Norway’s excellence in Internet penetration is not the only area they excel in. Norway is also a large oil producer. In typical Scandinavian fashion the country has collected the revenue carefully and thought about its impact on current and future generations. We admire that the Norwegians have been able to save enough to provide for future generations via the "oil fund". CloudFlare, via its careful fiscal mindset, also expects to continue serving Internet customers, well into future generations.

We are excited about placing Oslo on the CloudFlare map as our 75th data center. The studious followers of CloudFlare’s expansion plans will realize we still have more Nordic countries to add to that ever-growing map. Stay tuned! 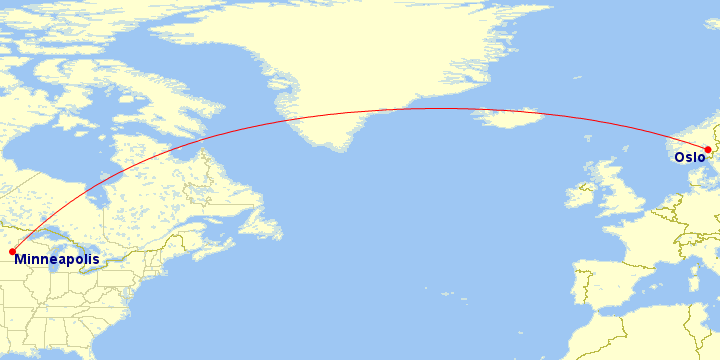 And yet, as we pointed out above, around 4,000 miles to the west, CloudFlare has followed the path of nearly a million Norwegians and decided to also put down roots in Minneapolis. The Twin Cities of Minneapolis and St. Paul are on the map as data center number 76.

Minnesota has around 16.5% of its population with an ancestry claimed from Norway. They migrated over the last two centuries and brought with them some of their culinary customs. (e.g. lutefisk and lefse). Lefse is a hand-rolled potato-based dough that produces a soft flatbread unique to Norway. It’s yummy. As for the gelatinous lutefisk (it’s an aged and dried cod) that’s served on top of that flatbread, it’s absolutely an acquired taste (and smell). A quick review shows there’s some CloudFlare employees that love it; some that don’t. We won’t share the exact results of that poll. You, the reader, can make your own decision.

Minnesota includes some pretty famous people with Norwegian descent. Garrison Keillor, of A Prairie Home Companion fame, comes to mind. Or is that just the personas depicted within the character's in Lake Wobegon that come off as Norwegian descendants? All we know is that there’s a statue of the Unknown Norwegian in Lake Wobegon.

Gene Amdahl is one amazing computer guy with parents of Norwegian descent. He’s one of the greatest contributors to large scale computers there ever was. First at IBM and then his own mainframe company, Amdahl Corporation. He was born in South Dakota; but we mention him here because North and South Dakota will be well-served by our Minnesota-based Minneapolis data center.

Yes, our Minneapolis data center will be able to serve more than just Minnesota. With the Midwest Internet Cooperative Exchange MICE, a local peering point, having CloudFlare as a new participant, we know we will be able to provide our customers with excellent coverage of this area.

Its exciting to announce these two data centers with their wonderful historical linking; but like we always say: stay tuned to hear about the next one!