For some time I’ve wanted to play with coverage-guided fuzzing. Fuzzing is a powerful testing technique where an automated program feeds semi-random inputs to a tested program. The intention is to find such inputs that trigger bugs. Fuzzing is especially useful in finding memory corruption bugs in C or C++ programs. 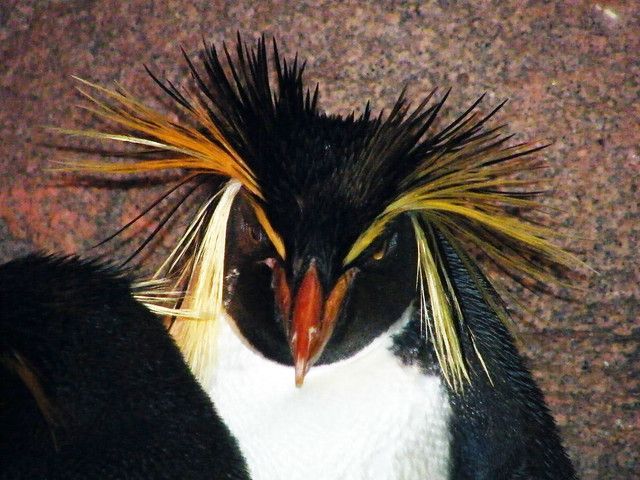 Image by Patrick Shannon CC BY 2.0

Normally it's recommended to pick a well known, but little explored, library that is heavy on parsing. Historically things like libjpeg, libpng and libyaml were perfect targets. Nowadays it's harder to find a good target - everything seems to have been fuzzed to death already. That's a good thing! I guess the software is getting better! Instead of choosing a userspace target I decided to have a go at the Linux Kernel netlink machinery.

Netlink is an internal Linux facility used by tools like "ss", "ip", "netstat". It's used for low level networking tasks - configuring network interfaces, IP addresses, routing tables and such. It's a good target: it's an obscure part of kernel, and it's relatively easy to automatically craft valid messages. Most importantly, we can learn a lot about Linux internals in the process. Bugs in netlink aren't going to have security impact though - netlink sockets usually require privileged access anyway.

In this post we'll run AFL fuzzer, driving our netlink shim program against a custom Linux kernel. All of this running inside KVM virtualization.

This blog post is a tutorial. With the easy to follow instructions, you should be able to quickly replicate the results. All you need is a machine running Linux and 20 minutes.

The technique we are going to use is formally called "coverage-guided fuzzing". There's a lot of prior literature:

Many people have fuzzed the Linux Kernel in the past. Most importantly:

We'll use the AFL, everyone's favorite fuzzer. AFL was written by Michał Zalewski. It's well known for its ease of use, speed and very good mutation logic. It's a perfect choice for people starting their journey into fuzzing!

If you want to read more about AFL, the documentation is in couple of files:

Coverage-guided fuzzing works on the principle of a feedback loop:

For example, let's say the input test is "hello". Fuzzer may mutate it to a number of tests, for example: "hEllo" (bit flip), "hXello" (byte insertion), "hllo" (byte deletion). If any of these tests will yield an interesting code coverage, then it will be prioritized and used as a base for a next generation of tests.

Specifics on how mutations are done, and how to efficiently compare code coverage reports of thousands of program runs is the fuzzer secret sauce. Read on the AFL's technical whitepaper for nitty gritty details.

The code coverage reported back from the binary is very important. It allows fuzzer to order the test cases, and identify the most promising ones. Without the code coverage the fuzzer is blind.

Normally, when using AFL, we are required to instrument the target code so that coverage is reported in an AFL-compatible way. But we want to fuzz the kernel! We can't just recompile it with "afl-gcc"! Instead we'll use a trick. We'll prepare a binary that will trick AFL into thinking it was compiled with its tooling. This binary will report back the code coverage extracted from kernel.

The kernel has at least two built-in coverage mechanisms - GCOV and KCOV:

KCOV was designed with fuzzing in mind, so we'll use this.

Using KCOV is pretty easy. We must compile the Linux kernel with the right setting. First, enable the KCOV kernel config option:

KCOV is capable of recording code coverage from the whole kernel. It can be set with KCOV_INSTRUMENT_ALL option. This has disadvantages though - it would slow down the parts of the kernel we don't want to profile, and would introduce noise in our measurements (reduce "stability"). For starters, let's disable KCOV_INSTRUMENT_ALL and enable KCOV selectively on the code we actually want to profile. Today, we focus on netlink machinery, so let's enable KCOV on whole "net" directory tree:

In a perfect world we would enable KCOV only for a couple of files we really are interested in. But netlink handling is peppered all over the network stack code, and we don't have time for fine tuning it today.

With KCOV in place, it's worth to add "kernel hacking" toggles that will increase the likelihood of reporting memory corruption bugs. See the README for the list of Syzkaller suggested options - most importantly KASAN.

With that set we can compile our KCOV and KASAN enabled kernel. Oh, one more thing. We are going to run the kernel in a kvm. We're going to use "virtme", so we need a couple of toggles:

KCOV is super easy to use. First, note the code coverage is recorded in a per-process data structure. This means you have to enable and disable KCOV within a userspace process, and it's impossible to record coverage for non-task things, like interrupt handling. This is totally fine for our needs.

KCOV reports data into a ring buffer. Setting it up is pretty simple, see our code. Then you can enable and disable it with a trivial ioctl:

After this sequence the ring buffer contains the list of %rip values of all the basic blocks of the KCOV-enabled kernel code. To read the buffer just run:

With tools like addr2line it's possible to resolve the %rip to a specific line of code. We won't need it though - the raw %rip values are sufficient for us.

The next step in our journey is to learn how to trick AFL. Remember, AFL needs a specially-crafted executable, but we want to feed in the kernel code coverage. First we need to understand how AFL works.

AFL sets up an array of 64K 8-bit numbers. This memory region is called "shared_mem" or "trace_bits" and is shared with the traced program. Every byte in the array can be thought of as a hit counter for a particular (branch_src, branch_dst) pair in the instrumented code.

It's important to notice that AFL prefers random branch labels, rather than reusing the %rip value to identify the basic blocks. This is to increase entropy - we want our hit counters in the array to be uniformly distributed. The algorithm AFL uses is:

In our case with KCOV we don't have compile-time-random values for each branch. Instead we'll use a hash function to generate a uniform 16 bit number from %rip recorded by KCOV. This is how to feed a KCOV report into the AFL "shared_mem" array:

Finally, we need to actually write the test code hammering the kernel netlink interface! First we need to read input data from AFL. By default AFL sends a test case to stdin:

Then we need to send this buffer into a netlink socket. But we know nothing about how netlink works! Okay, let's use the first 5 bytes of input as the netlink protocol and group id fields. This will allow the AFL to figure out and guess the correct values of these fields. The code testing netlink (simplified):

That's basically it! For speed, we will wrap this in a short loop that mimics the AFL "fork server" logic. I'll skip the explanation here, see our code for details. The resulting code of our AFL-to-KCOV shim looks like:

How to run the custom kernel

We're missing one important piece - how to actually run the custom kernel we've built. There are three options:

"native": You can totally boot the built kernel on your server and fuzz it natively. This is the fastest technique, but pretty problematic. If the fuzzing succeeds in finding a bug you will crash the machine, potentially losing the test data. Cutting the branches we sit on should be avoided.

"uml": We could configure the kernel to run as User Mode Linux. Running a UML kernel requires no privileges. The kernel just runs a user space process. UML is pretty cool, but sadly, it doesn't support KASAN, therefore the chances of finding a memory corruption bug are reduced. Finally, UML is a pretty magic special environment - bugs found in UML may not be relevant on real environments. Interestingly, UML is used by Android network_tests framework.

"kvm": we can use kvm to run our custom kernel in a virtualized environment. This is what we'll do.

One of the simplest ways to run a custom kernel in a KVM environment is to use "virtme" scripts. With them we can avoid having to create a dedicated disk image or partition, and just share the host file system. This is how we can run our code:

But hold on. We forgot about preparing input corpus data for our fuzzer!

Every fuzzer takes a carefully crafted test cases as input, to bootstrap the first mutations. The test cases should be short, and cover as large part of code as possible. Sadly - I know nothing about netlink. How about we don't prepare the input corpus...

Instead we can ask AFL to "figure out" what inputs make sense. This is what Michał did back in 2014 with JPEGs and it worked for him. With this in mind, here is our input corpus:

Instructions, how to compile and run the whole thing are in README.md on our github. It boils down to:

With this running you will see the familiar AFL status screen: 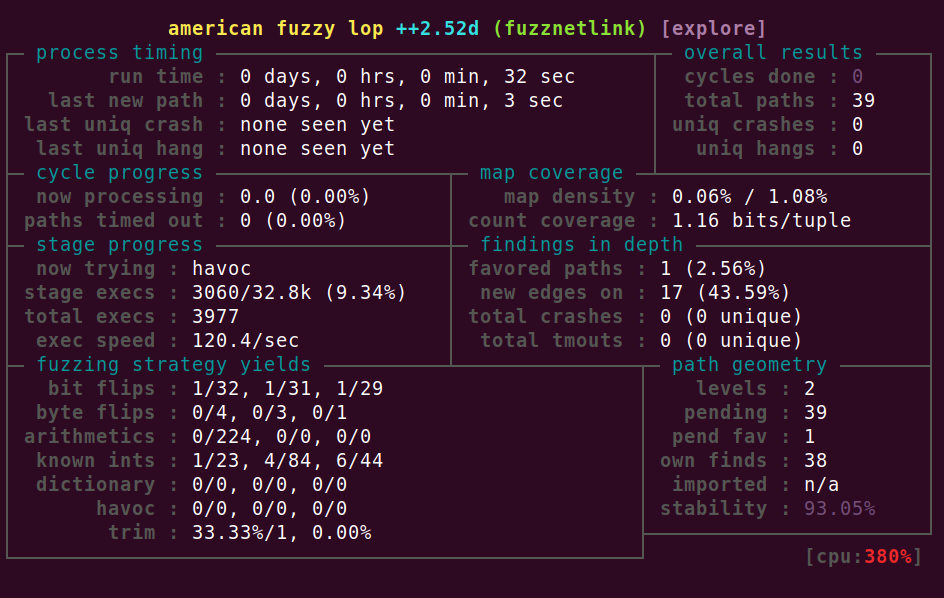 That's it. Now you have a custom hardened kernel, running a basic coverage-guided fuzzer. All inside KVM.

Was it worth the effort? Even with this basic fuzzer, and no input corpus, after a day or two the fuzzer found an interesting code path: NEIGH: BUG, double timer add, state is 8. With a more specialized fuzzer, some work on improving the "stability" metric and a decent input corpus, we could expect even better results.

If you want to learn more about what netlink sockets actually do, see a blog post by my colleague Jakub Sitnicki Multipath Routing in Linux - part 1. Then there is a good chapter about it in Linux Kernel Networking book by Rami Rosen.

But we achieved our goal - we set up a basic, yet still useful fuzzer against a kernel. Most importantly: the same machinery can be reused to fuzz other parts of Linux subsystems - from file systems to bpf verifier.

I also learned a hard lesson: tuning fuzzers is a full time job. Proper fuzzing is definitely not as simple as starting it up and idly waiting for crashes. There is always something to improve, tune, and re-implement. A quote at the beginning of the mentioned presentation by Mateusz Jurczyk resonated with me:

"Fuzzing is easy to learn but hard to master."

We have been dealing with conntrack, the connection tracking layer in the Linux kernel, for years. And yet, despite the collected know-how, questions about its inner workings occasionally come up. When they do, it is hard to resist the temptation to go digging for answers....

Encrypting data at rest is vital for Cloudflare with more than 200 data centres across the world. In this post, we will investigate the performance of disk encryption on Linux and explain how we made it at least two times faster for ourselves and our customers!...