A Tale of Two New Relationships

Late last spring, we were seeking to expand our connections inside of IBM. IBM had first become a direct Cloudflare customer in 2016, when its X-force Exchange business selected Cloudflare, instead of traditional scrubbing center solutions, for DDoS protection, WAF, and Load Balancing. We had friendly relationships with several people inside of IBM’s Softlayer business. We learned that the IBM “Networking Tribe” was evaluating various solutions to fill product gaps that their cloud customers were experiencing for DDoS, DNS, WAF, and load balancing.

In trying to engage with the people leading the effort, I made a casual phone call late on a Friday afternoon to one of the IBMers based in Raleigh, NC. When he understood that I was from Cloudflare, he replied, “Oh, I know Cloudflare. You do DDoS protection, right?” I replied, “Well, yes, we do offer DDoS protection, but we also offer a number of other security and performance services.” He indicated that he would be in the Bay Area two weeks later, and that he would bring his team to our office if we could make the time.

Also late last spring, my wife delivered our baby boy. I was scheduled to be on paternity leave during the IBMers’ trip to the Bay Area. Although I was intently focused on practicing modern burping techniques, this seemed like an exciting enough opportunity that I was able to convince my family’s leadership team (aka my wife) that I should sneak into the office for a couple of hours while my son slept.

Before their visit, the IBM team told us that they had evaluated a number of point solutions to fill the different product gaps, and that they had specific requirements for each type of solution. During our discussion, it became apparent that the Cloudflare network and architecture, which allows multiple security and performance services to be delivered easily and cost-effectively to end users around the world, could be a more effective approach than cobbling together point solutions. They wouldn’t have to integrate with multiple vendors, and their customers could achieve best-of-breed results while paying low, transparent prices.

Then the real work began, when the IBM team began to dig into our API documentation, run tests, and learn a lot more about our company. During the next five months, across multiple meetings in several cities, IBM became convinced that they should select Cloudflare to fill all of its product gaps. Cloudflare was ultimately selected for our trusted presence around the globe, scalable architecture, rich set of well-documented APIs, competitive and predictable pricing model, and commitment to empowering enterprise customers.

What We Are Launching

With Cloud Internet Services, IBM Cloud customers can get Cloudflare’s core DDoS, WAF, DNS, CDN, and related solutions through the IBM Cloud Dashboard with a few clicks. Certain Cloudflare services, typically available only in Cloudflare Enterprise Plans, can be purchased via the IBM sales team. 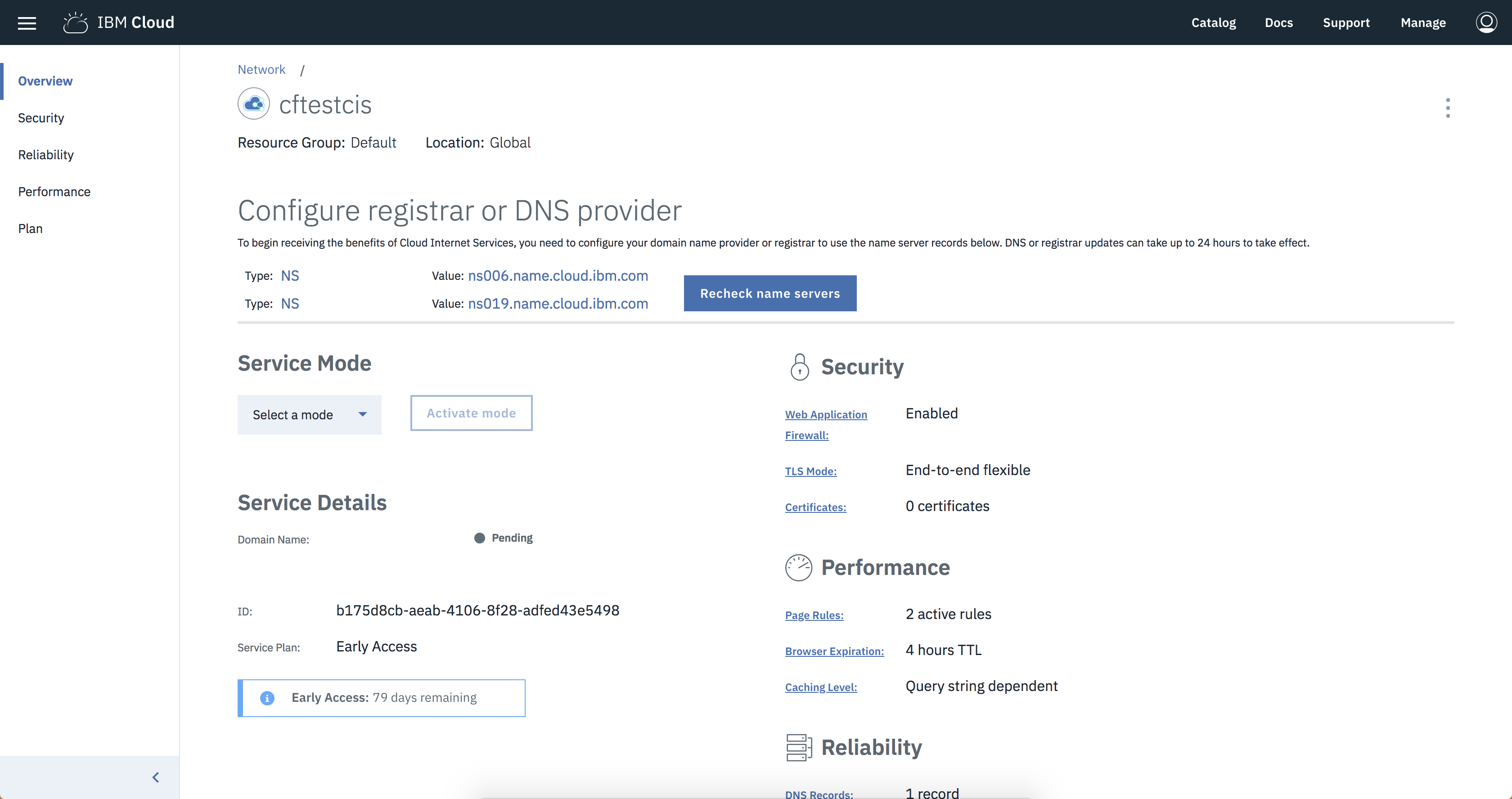 Concurrent with this announcement, IBM becomes an authorized reseller of Cloudflare’s entire suite of services. Cloudflare’s solutions can be deployed in any IBM customer environment, including on-premise, hybrid cloud, or public cloud.

A Legacy of Innovation

Founded in 1911 as the Computing-Tabulating-Recording Company (CTR), IBM was renamed "International Business Machines" in 1924. Over the past century, IBM has set the standard for innovation among corporations in America. One of the world's largest employers, with more than 380,000 employees and operations in 170 countries, IBM employees have been awarded five Nobel Prizes, six Turing Awards, ten National Medals of Technology, and five National Medals of Science. IBM holds the record for most patents generated by a business (as of 2018) for 25 consecutive years. During the modern era, IBM became famous for the IBM mainframe, exemplified by the System/360, the dominant computing platform during the 1960s and 1970s. More recently, IBM’s AI platform “Watson” powers new consumer and enterprise services in the health care, financial services, retail, and education markets.

Cloudflare is delighted to be working with IBM to expand our enterprise footprint. IBM has broad, deep experience and decades-long relationships with the world’s leading manufacturing, financial services, public sector, retail, and technology brands.

Enterprise customers will now be able to leverage and expand investments in IBM’s infrastructure offerings to realize faster, more secure web properties. As an example, enterprise customers who utilize IBM’s identity management services can invoke Cloudflare services through SSO, maintaining roles and access rights they are accustomed to.

Growing Out of Diapers

While still in its infancy, our partnership promises to bear fruit in multiple product and solution areas. Our shared vision includes harnessing the power of the Cloudflare data set. Integration with IBM QRadar, a flexible security analytics platform, is planned for release in the coming months. Longer-term, applications for end customers that leverage Watson for Cyber Security, can be developed.

All of this is possible as a result of Cloudflare’s cloud-native, API-first suite of network edge solutions. We couldn’t be more pleased about our opportunity to work together with IBM to deploy mission-critical security and performance edge services to enterprises around the world.

Interested in learning more about the partnership? Get in touch!