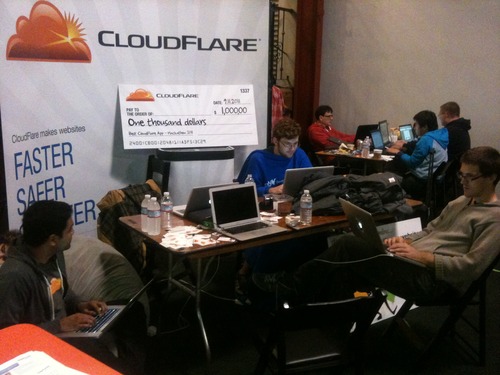 Ram, Chris, and Ian at 5am Sunday morning

Early Saturday afternoon, hundreds of hackers filled tables in a cavernous building in San Francisco, staking out their power cords and testing the Internet connection. This was the start of TechCrunch Disrupt's 2011 SF hackathon. CloudFlare jumped in to sponsor pizza and a $1,000 prize for the best CloudFlare App created during the hackathon.

Eight members of the CloudFlare team were there during the event to support hackers, answer questions about our new developers site, and hand out pizza. 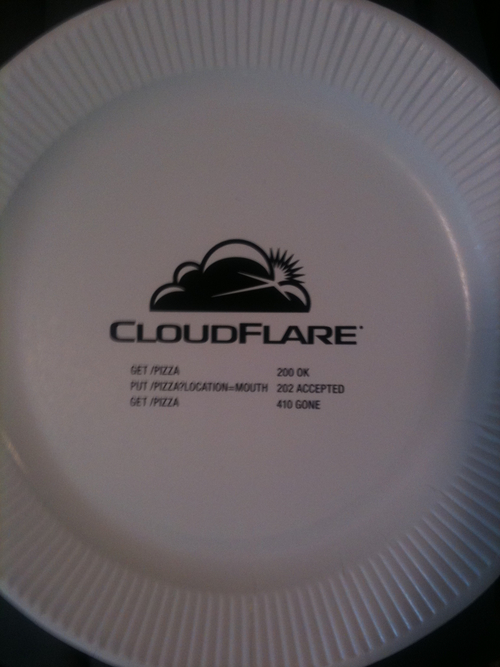 We Have A Winner!

After watching 130 one minute presentations, CloudFlare couldn't stop smiling at one demonstration.

A team from Hungary decided to think small, with an elegant game played only in the 16x16 pixel space commonly occupied by the favicon, the tiny image in a browser tab. Among an audience of their developer peers, the game from the United Task team earned applause, laughs and some gasps for their original name, which abbreviated "FAvorite Game icon."

CloudFlare CEO Matthew Prince was pleased to hand over the big money (literally) and name this hack as the winner of CloudFlare's $1,000 cash prize. 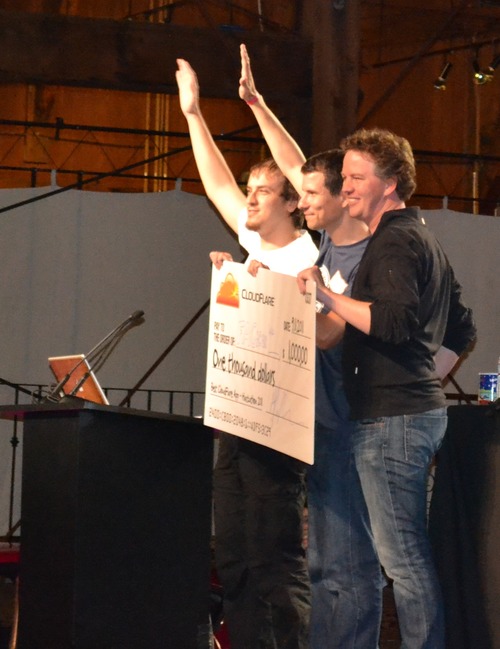 Quickly, the team turned their hack into a new CloudFlare App, available for free to all CloudFlare site owners. The App, named Favris, turns your favicon into a small tribute to the world's favorite block game.

We first met the United Task team after they presented their hack. Since Sunday, we've had a chance to welcome three members of their team to the CloudFlare office, and asked Hagyma a few questions.

How did you come up with this idea?

While doing serious stuff, we sometimes have crazy things in mind. One of us Gabor was reading about html canvas, and told us about it. Shortly we knew, we have something for the HACKATHON!

How did you work together?

We mostly worked against each other, we set in front of just one laptop and shouting at whoever was typing. One of us [Kescke] was unable to come to TCD, he was probably the most effective from overseas.

How long did it take?

It took more than we thought, but thank God, we didn't have to present before noon on Sunday. :)

Why did you come to TechCrunch Disrupt?

We are a webapp dev company from Budapest, Hungary. We did many things for clients, and decided to go on with some of our ideas as a startup. Since we don't have experience, we wanted to see how things are going in the valley.

CloudFlare launched about a year ago at TechCrunch Disrupt SF. It's been a pretty incredible year, and it all began at that conference. We're big fans of TechCrunch (even if we lost the competition to a service that reads Wikipedia aloud) and so we wanted to do something to support them this year....

CloudFlare launched almost exactly 2 years ago at the first TechCrunch Disrupt SF. It was an incredible experience for us and we owe a significant amount of our success to the stage Disrupt provided us....

CloudFlare launched at TechCrunch Disrupt San Francisco in September 2010. When you walked in the front door of that conference, the first booth you came to was the one for Media Temple....

CloudFlare Wins at Under The Radar

On Thursday, April 29, CloudFlare won the Judge's award at Under The Radar, an event showcasing new technology in the Silicon Valley. Since CloudFlare launched six months ago at TechCrunch Disrupt, we've saved 1000 years of time for web surfers....