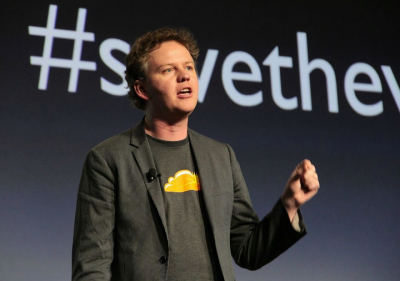 CloudFlare launched almost exactly 2 years ago at the first TechCrunch Disrupt SF. It was an incredible experience for us and we owe a significant amount of our success to the stage Disrupt provided us....

CloudFlare Has Been Nominated for a Crunchie!

CloudFlare is a Crunchie finalist in the category for Best Cloud Service in 2011. We need your help and your vote to win the category! The Crunchies are supported by VentureBeat, TechCrunch and GigaOm....

Early Saturday afternoon, hundreds of hackers filled tables in a cavernous building in San Francisco, staking out their power cords and testing the Internet connection. This was the start of TechCrunch Disrupt's 2011 SF hackathon....

CloudFlare launched about a year ago at TechCrunch Disrupt SF. It's been a pretty incredible year, and it all began at that conference. We're big fans of TechCrunch (even if we lost the competition to a service that reads Wikipedia aloud) and so we wanted to do something to support them this year....