At the Risk of Tooting Our Own Horn... 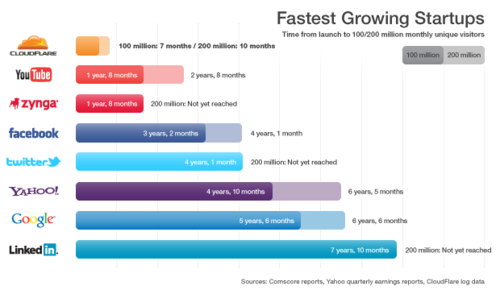 Kevin, the visual designer who recently joined CloudFlare's team, pulled together this graph the other day. Even having lived through the last 10 months, it's still incredible to see them represented here. We reached 100 million people experiencing the benefits of CloudFlare's network about seven months after our launch. After that, it took us only three more months to cross 200 million. And our growth has continued to accelerate: as of this morning, just a couple weeks after crossing 200 million, more than 230 million people every month now experience a faster, safer Internet because of CloudFlare.

One thing that I find particularly interesting about this graph is a similarity between most of these fast-growing companies. With the notable exception of Zynga (and to a lesser extend Yahoo) they have all built platforms that enhance other people's content. YouTube allowed anyone to publish their own videos. Similarly, Twitter, LinkedIn, and Facebook let anyone share their own personal and professional details with a broad audience. In some ways, Google's platform is backward of the others -- taking other people's content and overlaying an index to make it searchable -- but the core idea of making other people's content better is the same.

Several months ago, I was talking with one of the famous, gray-haired engineers of Silicon Valley and he said, "What CloudFlare really is is the YouTube for websites." I have to confess that didn't entirely click for me until Kevin showed me this graph. There were ways to publish videos online prior to YouTube, but the company made doing so faster, easier, and better. There are ways to publish websites prior to
CloudFlare, but what we've built is building a transparent platform to make any website faster, safer, and better.

This is an incredibly rewarding job, but today was particularly fun. We sat one of the conference rooms in the CFHQ and planned the rollout of what we're launching next. The Internet continues to suffer many challenges, but we think we've built a platform that can continue to help solve many of them. Stay tuned...

We regularly monitor the Alexa top 1 million websites for trends. Specifically, we've been tracking how many of them support IPv6 connections. The numbers are still low but have been improving....