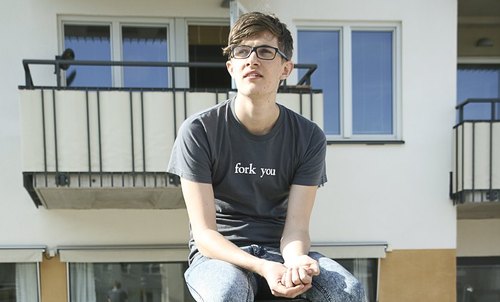 I wanted to take a moment to share a development from this past week. In June we had planned on releasing a new web app every business day. When we got to the start of this last week, however, we realized that we had gotten ahead of our app developer partners and no one would be ready in time to release. We scrambled to come up with an idea to release one new app. "I saw the coolest thing last week," one of our frontend developers said, "it's like the old game Asteroids, but you can play it against the objects that are on your website."

Enter Erik Rothoff Andersson, a 18-year-old living in Sweden who embodies all the best aspects of the term "hacker." He had built the "coolest thing" web-based game, which he dubbed "Kick Ass," in a 24-hour coding binge that began on a whim at 2:00am one morning. The game is elegantly simple: you pilot a little triangle of a space ship as you fly around a website and blast any objects that are part of the screen. Our team spent half a day just inserting the game on pages and then blowing them to smithereens.

John, who heads CloudFlare Apps, tracked down Erik and offered him a simple proposition: what if we made it one-click simple to install the game on any site on CloudFlare? We will charge a nominal fee ($0.99), handle all the billing, provide a world-class CDN to host the code, and send you a check for the majority of the revenues generated from the sales every month. I'm happy to report that Erik is not only a terrific coder, but a rationale businessman, and he quickly agreed.

We went to work to give his game the treatment it deserves. Here's what we came up with: There are few geek joys greater than discovering a so-called "easter egg" hidden within a program or website you love. We wanted to give every website owner the ability to hide their own easter egg for their visitors to find on their sites. If you install "Browser Blaster" (we renamed, with Erik's permission, to something we thought was more descriptive), you can pick a secret keystroke series that, if your visitors type it, will cause the game to appear. Unless they know the keystroke pattern, no one will ever know it's there.

A mini game that allows you to literally blast the trolls' comments right off your bulletin board (if you know the secret code) may not seem like a big deal, but I think it's revolutionary. Until now, many talented web app hackers have lacked the distribution channel, infrastructure, and billing process to fully realize the potential of their work. CloudFlare is going to change that. While most of our apps have come from established developers, we hope over time to enable more developers like Erik. It's unlikely he's going to get rich off selling Browser Blaster $0.99 at a time, but how cool is it if a burst of inspiration and a night of hacking could result in a little extra income each month. And, you never know, not too long ago Zynga was seen as a little company building silly games.

If you're a CloudFlare user, you can try Browser Blaster on its description page and install it on your site with just a few clicks. If you're not a CloudFlare user yet, here's yet another reason to sign up. And, if you're a hacker in the spirit of Erik, who has developed a cool web app you think the world would love, contact us and we can help provide you with a platform to bring it to market.