Grüetzi Zürich, our 5th point of presence (PoP) to be announced this week, and 69th globally! Located at the northern tip of Lake Zürich in Switzerland, the city of Zürich, often referred to as "Downtown Switzerland," is the largest city in the country. Following this expansion, traffic from Switzerland's seven million internet users to sites and apps using CloudFlare is now mere milliseconds away. Although best known to some for its chocolate and banks, Switzerland is home to many of the most significant developments prefacing the modern internet.

It was in 1989 that Tim Berners-Lee, a British scientist at CERN, the large particle physics laboratory near Geneva, Switzerland, invented the World Wide Web (WWW). Tim laid out his vision to meet the demand for automatic information-sharing between scientists in universities and institutes around the world in a memo titled, "Information Management: a Proposal". Amusingly, his initial proposal wasn't immediately accepted. In fact, his boss at the time noted that the proposal was, "vague but exciting" on the cover page. 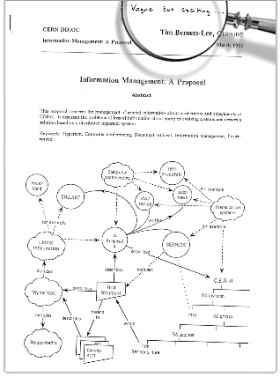 The first website at CERN—and in the world—was dedicated to the World Wide Web project itself and was hosted on Berners-Lee's NeXT computer (one of Steve Jobs' early projects). The website described the basic features of the web, how to access other people's documents and how to set up your own server. The NeXT machine—the original web server—is still at CERN to this day. In 2013, as part of the project to restore the first website, CERN reinstated the world's first site to its original address.

Fast forward to 2014, the year we celebrated the Web's 25th birthday, and almost two in five people around the world are on the WWW.

As we noted in a previous post, one of the exciting things about working at CloudFlare is our position at the vanguard of technology and the internet. This includes our efforts to provide universal support to our customers for IPv6 and SPDY, along with our recent announcement of DNSSEC and HTTP/2 support. Moreover, every CloudFlare customer—including our free users—is now issued an SSL certificate at no additional cost to provide a secure browsing experience that includes support for the latest cipher suites and SHA-2 signature algorithms. If you'd like to help keep the web available, secure and fast for everyone, consider joining us.