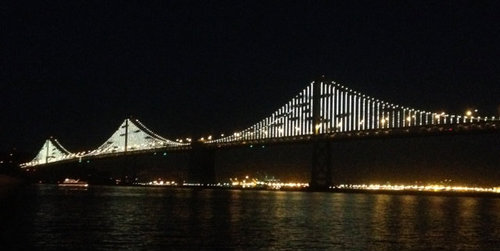 When you think of San Francisco, undoubtedly one bridge in particular comes to mind - The Golden Gate Bridge. This year, however, the Bay Bridge is getting its moment in the spotlight thanks to Words Pictures Ideas, a CloudFlare customer.

Words Pictures Ideas services brands and organizations in need of smarter communications. While thinking of ways to commemorate the 75th anniversary of the Bay Bridge, WPI founder Ben Davis came up with the idea to turn the West Span of the bridge into a canvas for light art.

CloudFlare suggested a few small optimizations (minification, an image that wasn't proxied because on a "grey cloud" DNS record), one useful reminder (allowlist the CloudFlare IPs), and a powerful recommendation: Cache Everything.

By default, CloudFlare will cache obviously static assets, but pass dynamic HTML through to the customer's webserver. For heavy load, on content that is not changing rapidly, full HTML pages -- or the entire site -- can be delivered from CloudFlare's global network, preserving the customer's webserver, database and other infrastructure. (Note: combined with single file purge, CloudFlare can serve as the global network for delivering a static site even with rapid changes, much as the Obama 2012 web team did.)

On the day of the unveiling, with Cache Everything turned on,
TheBayLights.org saw traffic increase with a decrease on their system's resource utilization. 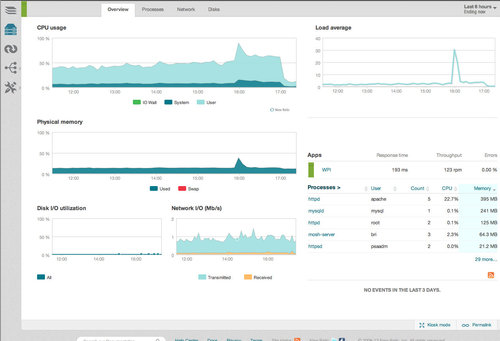 By mid-day, a rush in traffic caused more load than the event's peak at 8:00 pm. The graph below shows an interesting resource demand for the site pre/post cache everything:

The site saw the largest influx of traffic between 8:00-9:00 pm, but the average I/O during that hour was under 2Mb/s. By midnight traffic was back down to only 2X of baseline traffic levels.

"We began to celebrate at 9:15 pm as we were confident that the peak in site traffic had been reached and there were no issues," said Brian. "We are thrilled with the guidance and help CloudFlare offered in keeping us online during our biggest moment of the year, as well as the day to day performance and security they provide for all of our sites."

The Bay Lights will continue to shine for the next two years, creating yet another tourist stop in San Francisco. At CloudFlare, we are excited to be a part of the experience and look forward to helping keep TheBayLights.org shining online.

It is now commonly accepted as fact that web performance is critical for business. Slower sites can affect conversion rates on e-commerce stores, they can affect your sign-up rate on your SaaS service and lower the readership of your content....

In February, Troy Hunt unveiled Pwned Passwords v2. Containing over half a billion real world leaked passwords, this database provides a vital tool for correcting the course of how the...

The load time of your website not only affects your search engine rankings, but is also correlated to the conversion rate on your site....