A Thanksgiving Story: Surviving the Crush of Holiday Traffic 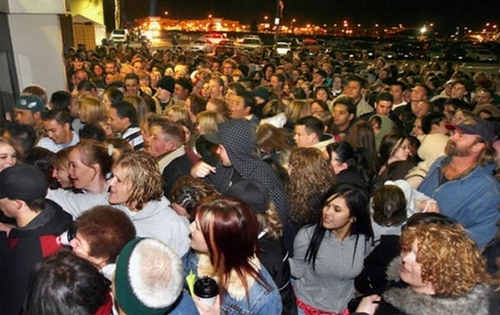 This is the story of two things that are deeply American: post-Thanksgiving shopping and scrappy entrepreneurs.

On the fourth Thursday in November, the United States celebrates Thanksgiving. The Friday after Thanksgiving, known as Black Friday, is considered the official start of the holiday shopping season. It is typically the busiest (offline) shopping day of the year. Shopping after Thanksgiving is so deeply engrained in American culture that in 1939 in the midst of the Great Depression, when Thanksgiving was scheduled to fall on the last day of the month, then-President Franklin D. Roosevelt moved the holiday up a week in order to get people out and spending more quickly.

Retailers today are attuned to this tradition and offer specials to lure customers to their stores. People literally will camp out for a week in front of some retailers in order to be the first in line when the stores open Friday morning. If you're reading this outside the United States and think it sounds crazy, rest assured that most of us here do as well. That said, suffice it to say that there is a high demand among many for the details of the Black Friday deals.

Just as American as shopping after Thanksgiving is the fact that if the market demands something, scrappy entrepreneurs will step up to meet that demand. In this case, the website 2011BlackFridayAds.com provides a one-stop resource to find out what all the biggest retailers will be offering. The site was created by Ty Price, who has been tracking Black Friday deals since 2008. This year, if you search Google for "Black Friday 2011," among the more than 71 million sites returned, Ty's is the first result.

Ty had been through this before and knew the amount of traffic to his site could spike significantly in the days leading up to Black Friday. So, in late September, he signed up for CloudFlare to help manage the coming load. Because 2011BlackFridayAds.com is hosted through MediaTemple, one of CloudFlare's hosting partners, setting up our service took literally two clicks and less than a minute. The graph below shows the growth in traffic over the last month, peaking in the last 24 hours at nearly 3 million page views a day (about 35 per second).

Turns out a lot of people want to see Black Friday deals, and we're proud to have helped ensure 2011BlackFridayAds.com stay up and running under crushing load. CloudFlare didn't just make the site safer and protect it from attacks, we also significantly reduced the load on the servers so they could keep up with visitors' requests. In fact, CloudFlare cut the number of requests that needed to be handled by the server by nearly half a billion, or about 75% of the total load it would have experienced without CloudFlare. We also saved the site more than 23 Terabytes, 93% of the bandwidth that would have otherwise been used serving the site's pages.

Any downtime experienced by a site is quickly punished by Google,
meaning that even if you have an initially popular site, if you can't stay online you can't stay on top. CloudFlare helped 2011BlackFridayAds.com stay fast and reliable, even under a crushing load, and the effect has kept it at the top of the rankings and kept the traffic growing. Speed and reliability are the foundation of SEO.

As Ty just wrote me via email: "CloudFlare has done wonders for us this year. It's amazing how fast the site is." Helping ensure the sites of entrepreneurs like Ty could perform as well as the big companies' is why we — a scrappy group of entrepreneurs ourselves — built CloudFlare in the first place.

While Black Friday is the biggest offline retail shopping day, the Monday after Black Friday, a day now known as Cyber Monday, is reportedly the largest for online shopping. Everyone in the U.S. returns to work, still in a shopping mood, and takes any downtime at their desks to scour Internet retailers for gifts. If you're an online business, you literally can't afford to go down. And, if you're a eMerchant who finds yourself worried over the coming days that your site might fail, spend the few minutes it takes to sign up for CloudFlare. Our basic service is free (Ty uses the PRO version for
$20/month), it doesn't require any technical skill to setup, and it will work regardless of your platform.

The biggest Internet retailer in the world is Amazon.com. As of today, CloudFlare powers 5x the traffic of Amazon. In other words, if you're worried about a crush of traffic to your website over the coming holiday season, we're here for you and happy to help.

For those camped out in front of a Walmart for Black Friday, stay warm and make sure to check 2011BlackFridayAds.com from your smart phone for a preview of the latest deals. For those watching from the sidelines, check back to these pages after Cyber Monday for reports on Internet traffic patterns we saw.

And, for those in the United States, have a very Happy Thanksgiving.

In this blog post, we'll explore how Cloudflare Workers continues to excel as a JAMstack deployment platform, and how it can be used to power e-commerce experiences, integrating with familiar tools like Stripe, as well as new technologies like Nuxt.js, and Sanity.io....

What’s the biggest day of the holiday season for holiday shopping? Black Friday, the day after US Thanksgiving, has been embraced globally as the day retail stores announce their sales....

In March 2013, we started testing Railgun, and slowly rolled it out across our three web properties. We saw immediate results. First, we saw instant reductions in time to retrieve uncached HTML documents, and as an ecommerce web property every millisecond counts....