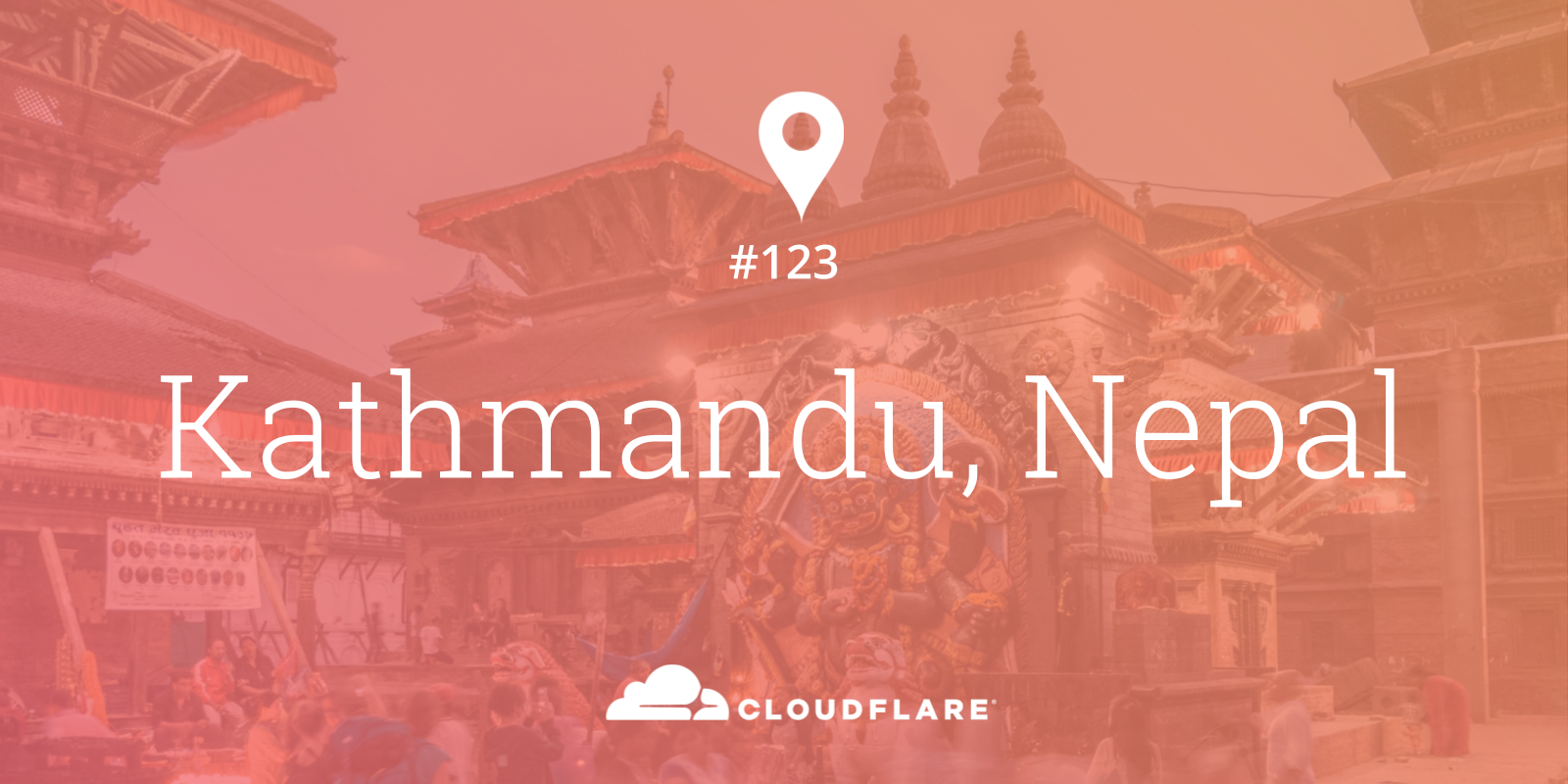 We said that we would head to the mountains for Cloudflare’s 123rd data center, and mountains feature prominently as we talk about Kathmandu, Nepal, home of our newest deployment and our 42nd data center in Asia!

Five and three quarter key facts to get started:

The mountainous nation of Nepal is home to Mount Everest, the highest mountain in the world, known in Nepali as Sagarmāthā. Most of us learn that at school; however there’s plenty of other mountains located in Nepal. Here’s the ones above 8,000 meters (extracted from the full list) to get you started: 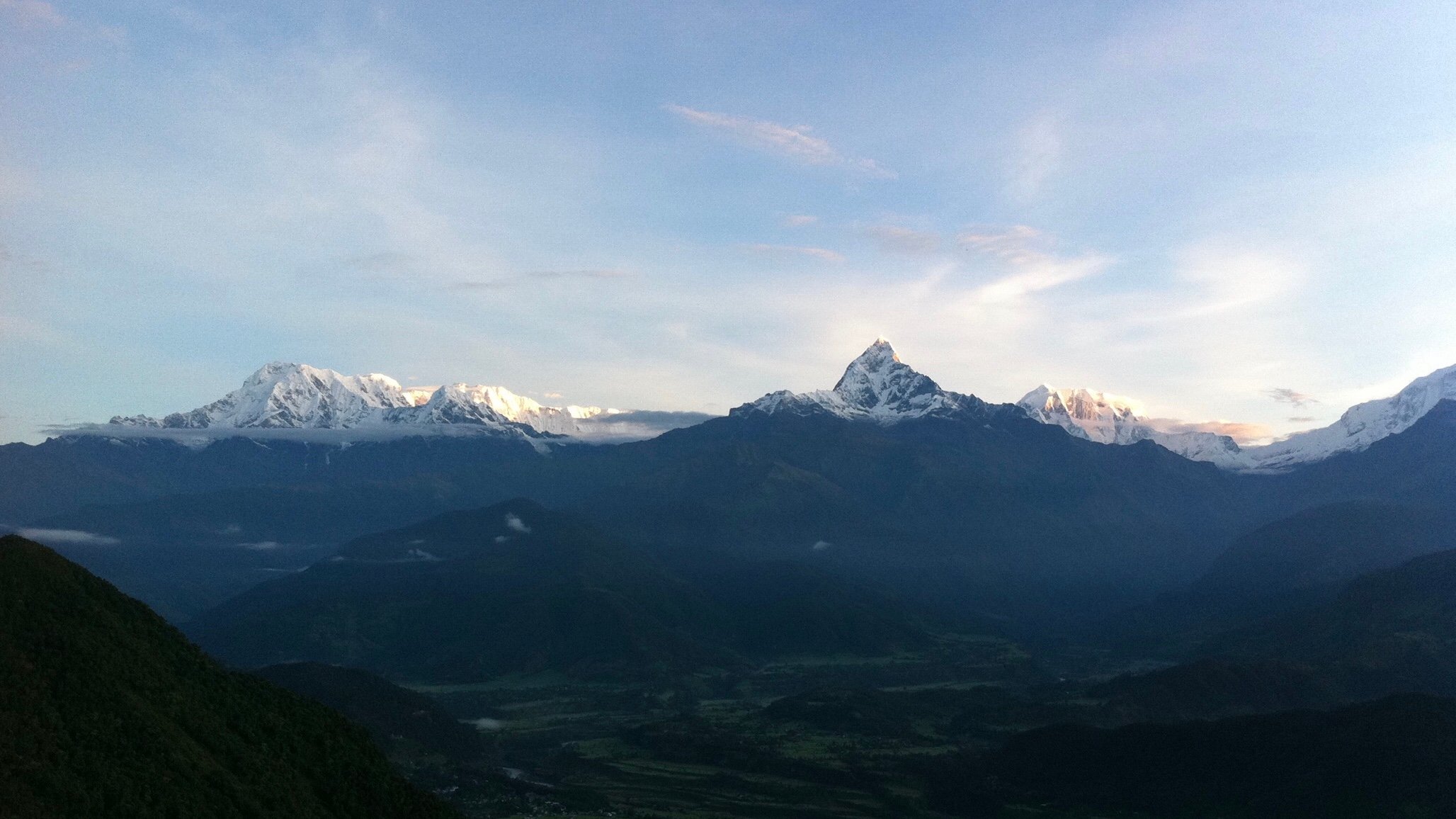 Photo of Annapurna taken outside Pokhara by blog author

As we said, Kathmandu and Nepal are very mountainous region! Some of these mountains are shared with neighboring countries. In-fact, the whole Himalayan range stretches much further than just Nepal as it also encompasses neighboring countries such as Bhutan, China, India, and Pakistan.

The official flag of Nepal is not a rectangle, it’s a very unique shape. No other flag comes close to having this shape. At first viewing it looks simple, just two triangles (representing the Himalayas) placed vertically against the flagpole. Nope - the triangles have a very specific dimension.

The flags symbolism goes beyond the mountains. The two white symbols represent the calming moon and fierce sun or sometimes the cool weather in the Himalayas and warm lowlands.

But back to those two triangles. Ignoring the old adage ("It was my understanding that there would be no math."), let’s grab what Wikipedia says about the shape of this flag and see if we can follow along.

First off, let’s explain irrational vs rational numbers (or ratios or fractions). A rational number is a simple P/Q number like 1/2 or 3/4 or 1/5 or even 16/9 etc etc. The numerator and denominator must both be integers. Even 100003/999983 (using prime numbers) is a rational number. If the denominator is 0 then the number isn’t rational.

(Read up about Hippasus, who’s credited with discovering the existence of irrational numbers, if you want an irrational murder story!)

That’s enough math theory; now back to the Nepali flag. Each red triangle has a rational ratio. The flag is started with simple 1:1 and 3:4 ratios and that’s the easy part. We are all capable of grabbing paper or cloth and make a rectangle that’s 3 inches by 4 inches, or 1.5 meters by 2 meters or any 3:4 ratio. It’s simple math. What gets complicated is adding the blue border. For that, we need to read-up what was said by the On-Line Encyclopedia of Integer Sequences (OEIS Foundation) and Wikipedia. They both go into great depth to describe the full mathematical dimensions of the flag. Let’s just paraphrase them slightly:

However the math (and geometry) award goes to the work done in order to produce "Calculation of the aspect ratio of the national flag of Nepal". The final geometric drawing is this: 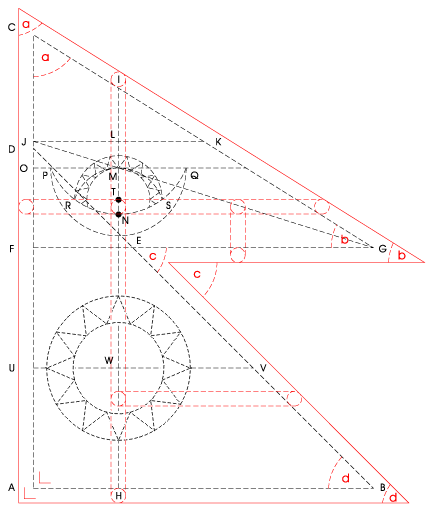 Yeah - that’s going a bit too far for a Cloudflare blog! Let’s just say that Nepal’s flag is unique and quite interesting.

We are especially excited to announce our Kathmandu data center while attending APRICOT conference, being held in Nepal this year. The event, supported by APNIC, the local Regional Internet address Registry (RIR) for the Asia-Pacific region, attracts leaders from Internet industry technical, operational, and policy-making communities. Cloudflare's favorite part of APRICOT is the Peering Forum track on Monday.

Cloudflare has already deployed into neighboring India, and any astute reader of these blogs will know we are always working on adding sites where and when we can. The SAARC countries are in our focus.

For Cloudflare‘s next two data centers, we head to a different continent and way-south of the equator. Throughout 2018, we’ll announce a stream of deployments across many different cities that each improve the security and performance of millions of our customers.

If you’re motivated by the idea of helping build one of the world's largest networks, come join our team!