On September 16 2015 at 10:00AM PST, Apple released their latest update to the iPhone: iOS 9. For several days after the announcement, ISPs and customers reported problems downloading iOS 9 due to overloaded servers. Obviously, the demand for iOS 9 was higher than even Apple anticipated, but how much higher? Few organizations outside of Apple have any idea what the actual iOS 9 adoption rates look like.

By analyzing the user agent strings of requests passing through the CloudFlare network, we were able to piece together a pretty good picture of iOS 9 uptake. Here’s an hour-by-hour look at requests from iOS 8 devices (blue) and iOS 9 devices (orange) for the first 24 hours after the announcement.

We started seeing small amounts of iOS 9 usage before it was officially released, followed by a spike immediately after the launch (times are shown in UTC, so the 10:00AM announcement shows up as hour 18). You can also see a second spike at 10:00 UTC when Europe started waking up.

Even though the official release was for iOS 9.0, we also found beta iOS 9.1 in the wild. Curious about the comparative traffic between the two? 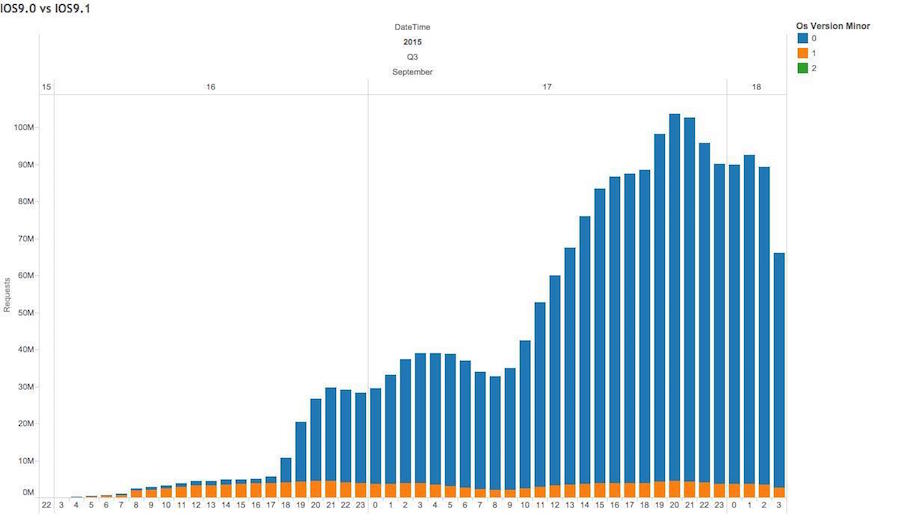 iOS 9.0 is shown in blue, while 9.1 is shown in orange. As you can see, 9.0 adoption exploded after Apple’s official launch, while the 9.1 beta requests remained steady.

Fast-forward five days, and it’s clear that iOS 9 adoption didn’t slow down after the launch. As of September 21st, the relative traffic of iOS 9 (orange) to iOS 8 (blue) on the CloudFlare network is around 30-35%.

A key part of the iOS 9 announcement was that all iOS apps running on 9.0+ will require IPv6 support. The IPv4 address space is nearly exhausted, and switching to IPv6 is the only way to keep adding more devices to the global Internet.

iOS 9’s IPv6 requirement compliments CloudFlare’s mission to make a better Internet. We’ve been doing our part to encourage IPv6 adoption by providing free IPv6 support to all web properties on our network.

Although it’s still pretty early, we can already see an uptick in IPv6 requests due to iOS 9: 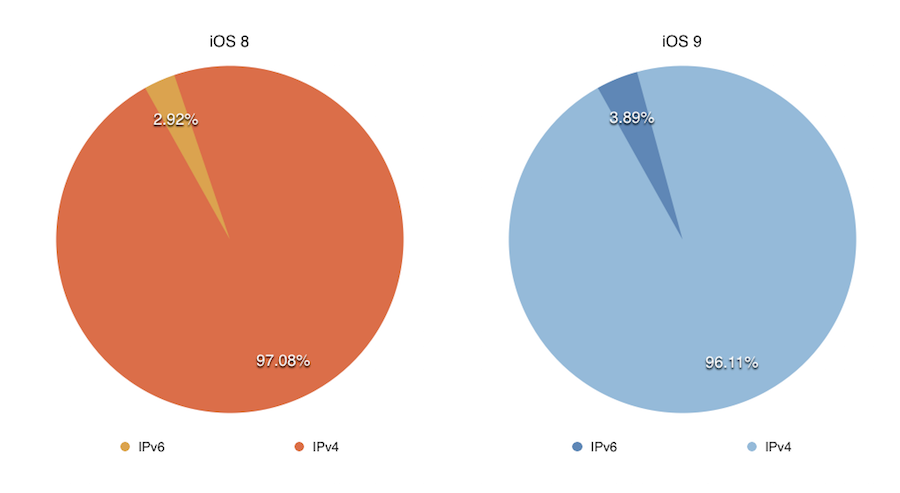 The first chart shows the number of IPv4 vs. IPv6 requests for iOS 8, while the second shows iOS 9. Even after only a few days, we’re seeing a 1.07% increase in IPv6 requests thanks to iOS 9.

Seeing over 5% of global Internet requests gives us an interesting perspective on current events. We get to watch the worldwide impact of everything from product launches like iOS 9 to hiccups in the Internet infrastructure like the Dyn outage of last July and even governments turning off the Internet. We try our best to use our unique vantage point to better the Internet as a whole and raise awareness for critical technologies like IPv6.

The average internet user consumes vast amounts of data on a daily basis but rarely – unless an avid follower of Max Schrems - thinks about how the data flows or the mechanisms and legal arrangements in place to make it all happen....